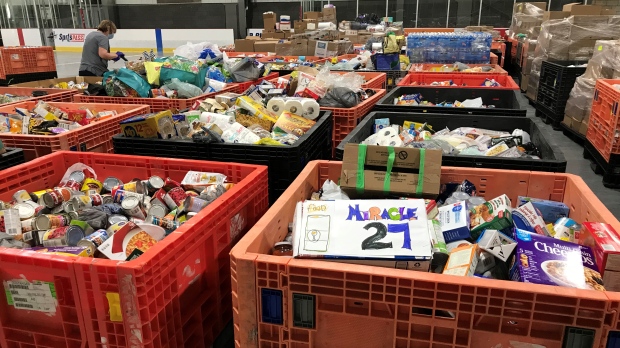 A miracle is happening in Windsor-Essex

Organizers say more than 200,000 kilograms of food has been collected, and they’re still counting.

Vehicles were decorated in blue and white and everyone was in good spirits for the region wide food drive.

The fundraiser kicked off with a surprise donation of over $40,000 from Champion Products on Friday.

“Over 11,000 people just in our city have come together for the same cause and the same purpose due to Chatham-Kent kind of kicking it off. So we saw a need, we attacked it, and everyone has come together to just make a miracle happen today,” said co-organizer, Erin Kane.

Throughout the day, the army of volunteers worked together like a well-oiled machine.

The donations collected were delivered to multiple locations across Windsor-Essex, including the WFCU Centre, where they were staged and sorted.

Organizers say ice pads in the arena began filling up so quickly that donations had to be temporarily stored at other buildings.

Items collected will be donated to the Windsor-Essex Food Bank association and the Unemployment Help Centre.

However, the unemployed help center’s June Muir says, anyone in need is welcome to the items collected.

“Many of us are looking into the future as to how we are going to keep food on the table for those that need it and now this miracle today is going to do that, so we are quite happy about it,” said Muir.

Mayor Drew Dilkens joined in on the action and says the turnout was so massive that it may take days to weeks to determine the total donations collected.

“It will take an army of volunteers to actually sort through the all of the material as well, but we are prepared to do it,” said Dilkens.

Organizers are so overwhelmed with donations, they’re asking anyone who wants to help sort donations, to go to the WFCU Center at 8787 Mchugh Street as soon as possible.

Volunteers are asked to wear a mask if they choose to come out and help.