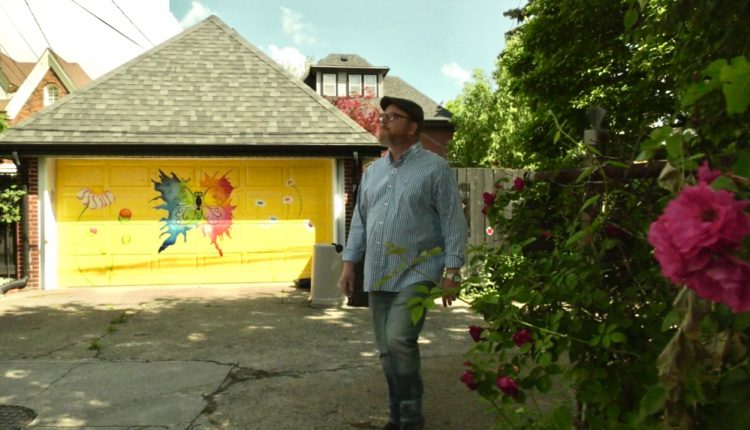 Back alleys are an urban design relic of the past, with many of the City of Windsor’s hundreds of kilometers of laneways now in a state of disrepair and a breeding ground for nefarious activity.

But some residents are working to reclaim the spaces, including one in Walkerville, “Butterfly Lane,” which recently became the first alley in Windsor to be named.

“This is officially on city books called Butterfly Lane. And once you name something, you start to love it,” Holt said.

The Brain Injury Association of Windsor-Essex put forward the naming application to name the alley off Ontario Street between Argyle Road and Devonshire Road. The organization very quickly got neighbors and artists on board to paint alley-facing fences and garages with murals over the past year.

Nancy Lessard, whose home backs onto the alley, knocked on all of her neighbors’ doors and nearly everyone on the block agreed to take part.

Maryam Safarzadeh is one of the many artists who lent their time and skills to the project.

“We are trying to bring more beauty to the city and it’s kind of encouraging people to get those murals on their fences or their garage doors. And we try to bring life, colour, and joy,” Safarzadeh said.

Holt provided ward funds to erect the sign and in recent years helped bring about new policies for alley-naming and lighting.

“In a lot of neighborhoods, they’re just aching for this kind of attention,” Holt said, noting the benefits are for greater than just some pretty murals.

“The more people we have looking and watching and utilizing a public space like this, the less of that nefarious stuff we have as well,” said Holt.

It’s already working. Kelly Horrocks lives in the neighborhood, but now when she goes for a walk, she chooses Butterfly Lane.

“It’s got beautiful butterfly paintings and I like walking by to see if anything’s changed and to check it out,” Horrocks said. “It’s beautiful.”

Holt says more alley rejuvenation and place-making projects like this are in the works. Those interested should reach out to a councilor for guidance on how to get it done, noting there is very little bureaucracy that gets in the way as most of the changes take place on private property.

“We need the residents to actually embrace and take ownership,” Hotel said. “Name your alley and talk to your neighbors and say what needs to be honored in our alley and let’s move the process forward. I would love to do one of these a week.”

VIA Rail to resume full service from Windsor Thursday

Why are Pelee Island bird watchers looking at downtown Windsor?