Author of the article: 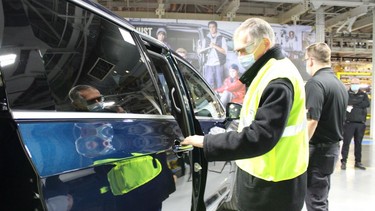 Stellantis CEO Carlos Tavares checks out a vehicle at the Windsor Assembly Plant on Wednesday, Feb. 9, 2022. Image courtesy of Stellantis

Stellantis CEO Carlos Tavares paid a visit to the Windsor Assembly Plant Wednesday experiencing first-hand the challenges poised by the protest at the Ambassador Bridge that is playing havoc with production at Windsor’s auto plants.

Ford’s Essex and Annex engine plants were both down Wednesday while the Windsor Assembly Plant resumed production this morning after having both of its Tuesday shifts shortened due to parts supply issues caused by the protest.

Tavares’s visit is part of his tour of all Stellantis plants worldwide. His Windsor visit also included a meeting with Unifor Local 444 officials.

“Since day one of the merger, Mr. Tavares has made it a priority to visit Stellantis locations around the globe to review opera

tion and importantly, to meet and connect with employees,” said Stellantis Head of Communications-Canada LouAnn Gosselin.

“As the Windsor and Brampton plants are important to the North American operations, he is visiting both locations this week.

“On average, he visits two or three sites a month across different regions of Stellantis.”

While Stellantis has avoided losing entire shifts this week, the stress the border delays are creating on the just-in-time supply chains are forcing the company to look at alternative arrangements for shipping parts to the Windsor plant.

“Stellantis confirms that the Windsor Assembly Plant had to cut short its first and second shifts on Tuesday due to parts shortages,” Gosselin said.

“The plant resumed production this morning (Wednesday). We continue to work closely with our carriers to get parts into the plant to mitigate further disruptions.”

Windsor Assembly is scheduled to run for the rest of the week.

The plant, which employs about 4,300 workers, is the company’s sole source for production of the Pacifica/Grand Caravan/Voyager minivans.

However, the dwindling supply of parts finally caught up to Ford’s Windsor engine plants Wednesday.

“It’s complicated because it’s not just one part we’re trying to get across, it’s a multitude of parts,” said Unifor Local 200 President John D’Agnolo.

D’Agnolo said Ford has been scrambling to make alternative arrangements to get parts to his Windsor plants. The company expects both the Annex and Essex Engine plants to be operational Thursday.

“They’re going to fly parts in for Essex Engine for Thursday production,” D’Agnolo said. “We were supposed to be making engines for Mustangs today.

“The only concern is they may run out of racks to place the engines on at Essex if they can’t get a truck there in time. If that happens, then they’ll just end the shift early.”

D’Agnolo said the company is keen to keep its Annex plant running where the much-sought after 7.3-liter engine for heavy duty trucks is produced. He said the company is sending out truckloads of parts earlier than normal today to ensure they get to the plant in time for Thursday’s production.

“They don’t want that (Annex) staying down,” D’Agnolo said.

“That’s a money-maker. They make thousands of dollars in profit on each truck and people want their vehicles.”

Ford employs about 1,800 people in Windsor between its two plants.

D’Agnolo said the protest at the Ambassador Bridge is self-defeating.

“They want to remove the mandates by shutting down the bridge because they think that will get people back to work, but they’re just shutting down everything else,” D’Agnolo said.

“We have people on lay off. People are losing their livelihood and it is defeating their argument. Unfortunately, their message is having a negative impact.”

D’Agnolo said he doesn’t expect the current border chaos will have any lasting effect on Ford’s relationship with its Canadian operations.

“They know this isn’t long term and it’ll be over soon,” D’Agnolo said. “Both sides have a real comfort in the relationship.

“Our product efficiency, quality and we have the best attendance in North America. Our members showed up for work during last week’s snowstorm and they had to shut a couple plants down in the US”

Sign up to receive Driving.ca’s Blind-Spot Monitor newsletter on Wednesdays and Saturdays

The next issue of Driving.ca’s Blind-Spot Monitor will soon be in your inbox.

Postmedia is committed to maintaining a lively but civil forum for discussion and encouraging all readers to share their views on our articles. Comments may take up to an hour for moderation before appearing on the site. We ask you to keep your comments relevant and respectful. We have enabled email notifications—you will now receive an email if you receive a reply to your comment, there is an update to a comment thread you follow or if a user you follow comments. Visit our Community Guidelines for more information and details on how to adjust your email settings.

Who’s running for mayor and council in Windsor, Amherstburg, Essex, and Kingsville?