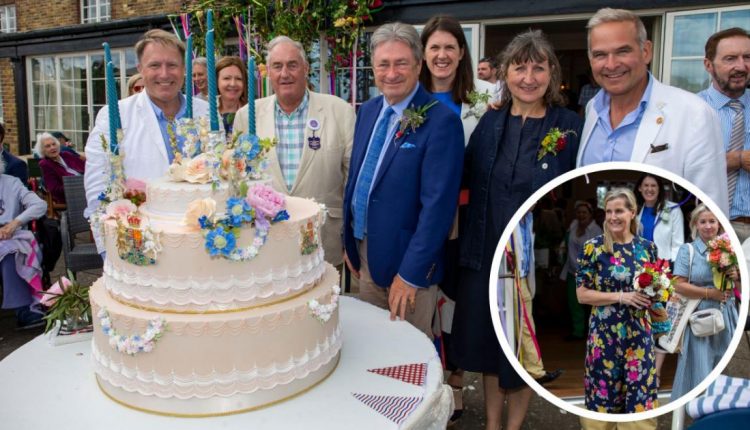 The Countess of Wessex cut the ribbon to mark the opening of the Royal Windsor Flower Show as it marked the Queen’s Platinum Jubilee with garden displays, floral arrangements and a celebration cake.

Sophie was joined by the Royal Windsor Rose and Horticultural Society (RWRHS) honorary president Alan Titchmarsh at the York Club in Windsor Great Park on Saturday, as the organization also celebrated its 130th anniversary.

Sophie was pictured alongside the gardener and broadcaster as she cut into a large three tier cake adorned with fresh flowers and the royal coat of arms which was baked in joint celebration of the RWRHS milestone and the Queen’s Platinum Jubilee.

The countess also gave out prizes to the winners of the children’s competition to create “a miniature garden fit for a queen” flower arrangement, with the best entry to be presented to the queen to sit on her breakfast table.

Members of the public who attended the event donned a mix of plastic, paper and flower crowns in celebration of the special Jubilee year show.

The public, along with the countess, had the opportunity to visit the Queen’s Platinum Jubilee Garden designed by award-winning designer Alan Williams of Landform Consultants, whose work has previously featured at the Chelsea Flower Show.

Sophie later met with the society’s trustees and was presented with her own posy.

The Countess, along with her husband the Earl of Wessex, had visited Gibraltar earlier this week, where they watched a special Queen’s Birthday Parade near the 19th century British-built barracks in Casemates Square.

They had previously been in Windsor for celebrations on the Jubilee weekend itself, as they attended a picnic with around 3,000 people on the Long Walk outside Windsor Castle.

The RWRHS charity was founded by Queen Victoria in 1892, and has enjoyed the support of six monarchs throughout its history.