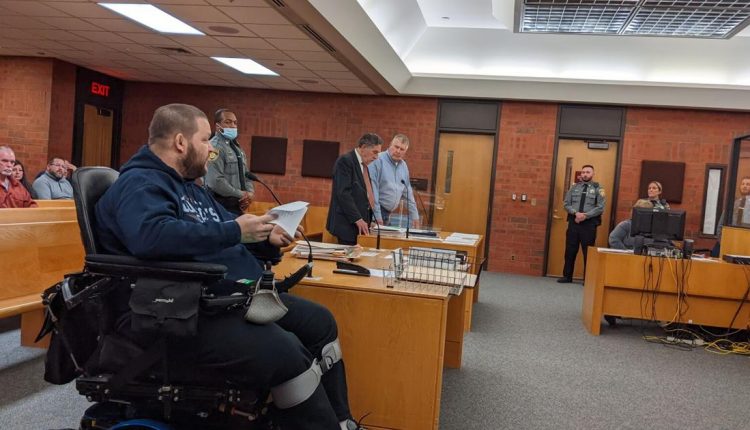 In comments in court Tuesday and earlier written statements, Marc Curto gave Judge Hope C. Seeley a vivid picture of what his life has become since Sept. 18, 2020, when a speeding pickup truck driven by Alan F. Jackmauh smashed into the rear of the vehicle he was driving on a back road at Enfield.

“I’ll never walk again,” said Curto, 47, who is paralyzed from the chest down as a result of a spinal fracture suffered in the crash. “I can’t dress myself. I can’t take care of myself.”

If the nature and circumstances of the offense were all she had to consider, Seeley said in Hartford Superior Court, she would have had no problem sentencing Alan F. Jackmauh, driver of the pickup truck, to the maximum five-year prison term permitted by his plea bargain.

But she said she also had to consider Jackmauh’s history and characteristics. They included having “worked extremely hard all of his life,” having only a single misdemeanor conviction for disorderly conduct and no motor-vehicle violations, the judge said.

Jackmauh, 58, who has listed an address on Main Street in East Windsor, “lived a quiet life,” Seeley said.

Balancing the conflicting considerations, the judge sentenced Jackmauh to three years in prison for the first-degree assault he was convicted of plea bargain in his January, followed by five years’ probation, with the possibility of up to 17 more years behind bars if he violates release conditions.

At the end of the sentencing, the judicial marshals handcuffed Jackmauh, who had been free on a $100,000 bond, and led him into the courthouse lockup.

Curto lived with his father in Windsor Locks when the accident occurred but now resides in a handicapped accessible apartment built onto his brother’s home in Agawam, Massachusetts. He has a civil lawsuit pending against Jackmauh. On the advice of defense lawyer Julian Schlesinger, Jackmauh declined to comment substantially during the sentencing.

That left Curto without an answer to the question he posed to Jackmauh in his remarks: “I would just like to know why you were going 100 miles per hour on that road.”

The crash data recorder, or “black box,” in the full-size pickup truck Jackmauh was driving showed that he was driving 96 mph five seconds before hitting the compact Ford Escape sport utility vehicle Curto was driving on Depot Hill Road in Enfield after 7 :30 that evening.

Jackmauh had slowed to 58 mph 0.5 seconds before hitting Curto’s SUV. The posted speed limit is 45 mph.

Schlesinger emphasized Jackmauh’s lower speed at the moment of impact. He said a defense expert has concluded that the crash was more severe because Curto moved his vehicle to the left before the crash rather than moving to the right shoulder, where the defense lawyer said there was “more than adequate space.”

Still, the defense lawyer acknowledged, Jackmauh had no right to put Curto in a position of having to make such a judgment.

Curto denied having moved left before the accident.

“I was in my right lane, driving normally, under the speed limit,” he said. “I wasn’t on the wrong side of the road,” he added, with emphasis.

Curto also argued that the crash “was not an accident” because Jackmauh’s recklessness caused it.

The judge agreed with that, telling Jackmauh he committed a crime involving “extreme indifference to human life.”

Curto gave the dozens of people in the courtroom a stark look at his life, referring to “how much energy it takes to fake being happy.”

He now lives in Agawam, Massachusetts in a handicapped accessible apartment built onto his brother’s home.