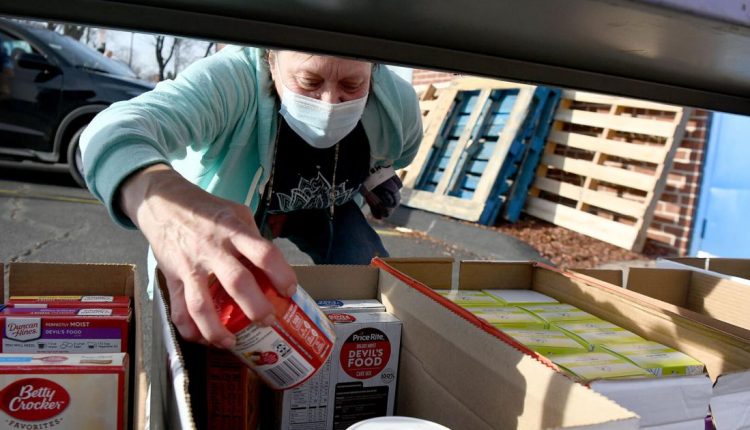 Despite rising food prices throughout the country, area food banks are stocked and prepared to feed those in need, but the COVID-19 pandemic continues to place an added burden on families, leading to more people coming to food banks for assistance.

Before the pandemic, there were about 390,000 people in the state who did not have enough to eat, according to Connecticut Foodshare President and Chief Executive Officer Jason Jakubowski.

At the peak of the pandemic that number ballooned to about 550,000, but has dropped to about 480,000 this year, which still requires food banks to purchase more food than before the pandemic, he said.

“We’re still definitely feeling the effects of the COVID pandemic,” Jakubowski said this week, adding that there has been a “definite impact on the price of food.”

According to the US Department of Labor, consumer prices in the country have risen at the fastest rate in nearly four decades.

The Consumer Price Index, or CPI, has increased 6.8% over the previous 12 months, the US Bureau of Labor Statistics announced last week.

“The indexes for gasoline, shelter, food, used cars and trucks, and new vehicles were among the larger contributors,” according to the bureau, which added that the CPI saw the largest 12-month increase since 1982.

Nonetheless, the generosity of those willing to help their neighbors continues to help keep Connecticut food banks stocked during the holiday season and beyond.

“The good thing about the state of Connecticut is that people are very generous, very giving, especially this time of year,” Jakubowski said. “I’m pleased with where the food donations are.”

He added that the more products cost, the more difficult it is for working families, making them more reliant on food banks.

The loss of extended unemployment benefits, and people being unemployed or underemployed can often force people to choose between paying for rent, utilities, medication, or food, Jakubowski said.

“In almost all of those circumstances, food is what they do away with, which is unfortunate,” he said, adding that while there is more attention placed on food banks during the holidays, the need does not necessarily increase compared to any other time of year.

“Hunger has no idea what time of year it is,” Jakubowski said.

Because of the difficulty of storing and transporting dairy products, food banks are always looking for those products, as well as fresh produce, he said, adding that the biggest issue right now is a lack of chicken and other poultry.

Regardless, Jakubowski said Connecticut Foodshare is sufficiently stocked and able to assist families in need.

“I am 100% confident that we will be able to meet the need of our clients and our pantries,” he said, adding that Connecticut Foodshare has been in business for nearly 40 years and is able to plan ahead. “Without question, we definitely have plenty of food to be able to distribute through the holiday season and into the new year.”

Connecticut Foodshare is based in Bloomfield, and serves several municipalities, including East Hartford, Enfield, Glastonbury, Manchester, Stafford, and Vernon.

Among the pantries partnered with Connecticut Foodshare is the Enfield Food Shelf, which is also seeing an increase in needy families, Executive Director Kathleen Souvigney said.

“We have many new families that are struggling due to food prices,” she said. “We’re seeing increases in the number of families that we’re serving.”

Souvigney noted that many families she’s spoken to said they’re still recovering from the loss of income during the pandemic, and are also finding it more of a struggle to purchase food because their incomes have not increased at the same rate of food costs.

“Their grocery store dollar is not going quite as far,” she said, adding that “things that would normally be staple items,” such as peanut butter and jelly, have dwindled from donors.

“When a donor goes out to purchase food, those higher-priced items aren’t necessarily coming in as they had in the past,” Souvigney said. “There’s definitely a decline in some of the more expensive items in terms of donating” because donors want to purchase the most food they can for the same amount of money.

“We’re all seeing it personally, too,” she said. “Everyone goes to the grocery store and sees the increase in prices.”

However, thanks to generous donors, including longtime sponsor the Knights of Columbus Council 50 in Enfield, the Enfield Food Shelf is prepared to assist those in need.

The Knights of Columbus donated more than 300 hams for Christmas, Souvigney said.

“We’ve been very fortunate here to have most of our regular donors still contributing,” she said. “We’re stable in terms of the amounts of food that we have.”

Souvigney said that some people in need may not visit a food pantry because they feel they are taking food from someone else, but she is encouraging people to reach out if needed.

“If you have a need, you should come,” she said. “We’ll adjust on our side to ensure that there’s sufficient food. People who have a need should seek out food assistance.”

Those in need or seeking to donate can visit

Celia Wheeler, director of transportation and basic needs for the Hockanum Valley Community Council in Vernon, also said that there was an increase in families coming to the food bank on Naek Road once the pandemic began.

There was a steady stream of clients as soon as the food pantry opened its doors at 9 am Thursday. A short line formed outside as clients waited to abide by a capacity limit in the pantry.

Also a partner with Connecticut Foodshare, the Vernon pantry is not facing any significant shortages, Wheeler said.

“We’re very fortunate with our private donors,” including local supermarkets, she said.

Wheeler said cereal is always something important to donate because it’s easy for children to make it themselves, as well as canned soup for the winter months.

To volunteer or donate money, people can visit

and can donate food in person at 27 Naek Road, suite 4.

A brand new regional food bank — Midwest Food Bank New England — is opening in Manchester and will serve the greater Hartford area and into southern Massachusetts.

Executive Director Jan Young said the agencies that she’s spoken with have “definitely seen an uptick” in clients because of the pandemic.

She said that food pantries are largely reliant on what products happen to be available and that with increased transportation costs and produce from overseas being backed up, some items are lacking, particularly some canned items.

In order to ensure there is a sufficient supply of nutritional items, Young said, food bank operators may have to purchase more items themselves.

Meanwhile, Windsor resident Jason Santos is getting creative in trying to attract would-be donors by erecting a large holiday display on his lawn at 25 Tiffany Drive.

The display includes 65 inflatable holiday characters and music. There is no admission fee, but Santos is hopeful visitors donate nonperishable food items collected in a large box near the candy cane walkway.

The food collected will be donated to the Windsor Food and Fuel Bank.

“I am very fortunate to be able to share these holiday decorations with others, and it feels like the right thing to give back and support our neighbors who need a little extra help during the holidays,” Santos said.