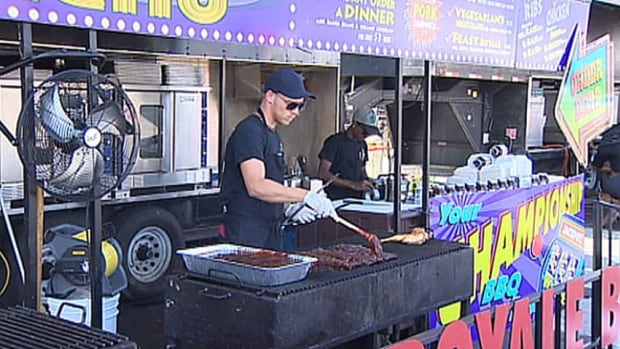 Health officials and food vendors have a message for people with big appetites – the food being served at two weekend festivals is safe to eat.

Ribfest at Festival Plaza and the Corn Festival at Lacasse Park in Tecumseh have started. In light of the food-borne illnesses at the Canadian National Exhibition in Toronto this week, where more than 100 cases of food poisoning have been reported, food safety is top of mind for customers and vendors.

The Windsor-Essex County Health Unit says it holds all outdoor food vendors to the same rigid standards as restaurants.

One Ribfest vendor prefers to serve seafood and has specific techniques to keep his meals from making people ill.

The seafood is brought in using the same type of coolers found on fishing boats. Then it’s refrigerated on site.

“We make sure it’s up to four degrees because all seafood has to be kept below four degrees to be able to serve it,” he said

“For garbage laying around, look at the utensils, you can only see a build-up of maybe a mold or dirt. So just be aware of that,” Arvanitopoulos said.

There must be hand washing stations for anyone handling the food, he said.

Josh Van Ham with “Ribs Royale,” the defending ‘people’s choice’ champion at Ribfest, said proper refrigeration before cooking and the proper warm temperature afterwards are the keys to safety.

“Just look for perfectly cooked ribs – they fall off the bone. Make sure that everything’s steaming and not cold and you should be good to go,” Van Ham said.

There have been no food safety issues at any local festivals this year, according to Heimann.

VIA Rail to resume full service from Windsor Thursday