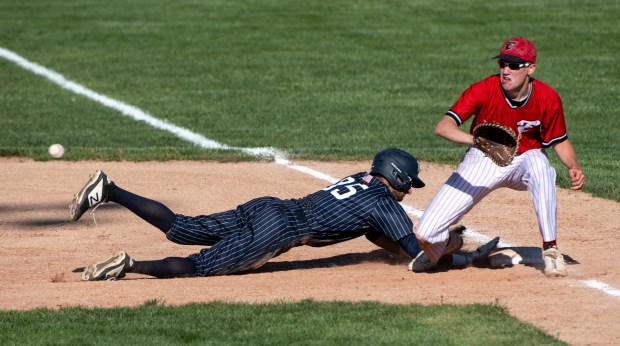 9 Windsor, 1 Greeley West, in Windsor: Windsor continued to play fine baseball, winning his third consecutive game and improving to 12-3 overall, 10-1 in Class 4A/5A Northern Colorado Athletic Conference play. The Wizards took the early advantage with two runs in the bottom of the second. They then tackled on five runs in the fourth to go up 7-0. Windsor seniors Jake Kauffman and Aaron Rolf each drove in two runs. Senior Jake Liley went 3 for 4 with a double, two runs and one RBI. Greeley West mustered just one hit, a single by senior Elijah Torrez. Freshman Caleb Chavies recorded the Spartans’ only RBI. Senior Riley Warmbrod pitched 6 1/3 innings for the Wizards. He allowed no earned runs on one hit, striking out 11 and walking three. Greeley West fell to 4-10 overall, 4-7 in 4A/5A NCAC play.

Eaton 7, Sterling 5, in Sterling: Two days after defeating Sterling in walk-off fashion, Eaton secured another close win against the Tigers. The Reds trailed in the back-and-forth game 5-4 before scoring three runs in the top of the seventh. Senior Jared McCormack led Eaton, hitting 2 for 4 with four RBI, a double and a run. Senior Jaden Stone had two RBI and a run on 3-for-4 hitting. Senior Dirk Duncan went 2 for 4 with an RBI and a run. Reds sophomore Mitch Haythorn was solid in his six innings on the mound. He allowed no earned runs on two hits, striking out nine and walking three. Eaton improved to 12-1 overall, 9-0 in 3A Patriot League play. The Reds are first and the Tigers are fourth in CHSAANow.com’s latest 3A rankings.

University 6, Brush 5, 8 inn., in Greeley: University needed to play an extra inning to extend its win streak to nine games. After the two teams traded rallies, the Bulldogs ultimately scored the walk-off winning run in the bottom of the eighth. Junior Riggs Towle led University, hitting 3 for 3 with two RBI, two doubles and a run. Senior Kanon Padilla, junior Logan Getting and sophomore Dalton Yaste had two hits apiece for the Bulldogs. University improved to 13-2 overall, 9-0 in 3A Patriot League play. The Bulldogs are ranked second and Brush is sixth in the latest CHSAANow.com 3A rankings.

GREELEY, CO – MAY 27:University’s Parker Disparti (35) dives back to first before Eaton’s Jared McCormack (33) can catch the ball to tag him out during the Eaton Reds baseball game against the University Bulldogs at University High School in Greeley May 27 , 2021. (Greeley Tribune file photo)

17 Northridge, 16 Niwot, in Greeley: Northridge prevailed in a slugfest to improve to 7-7 overall, 6-4 in 4A/3A Longs Peak League play. This win came just two days after the Grizzlies lost to Niwot 8-7. Northridge was seemingly in full control, up 10-6, until the Cougars scored eight runs in the top of the fourth to take a sudden 14-10 lead. The Grizzlies maintained their composure, scoring three runs in the bottom of the fourth and four more in the fifth to regain a 17-14 lead. Niwot scored two runs in the top of the sixth but couldn’t retake the lead. Northridge out hit the Cougars 20-17. Three Grizzlies players had three RBI apiece: junior Dylan Hubbard (2 for 3, 3 runs), junior Brendan Peterson (2 for 4, 2 runs) and junior Gannon McGeen (4 for 5, 1 run). Nine Northridge players connected on hits, seven had RBI and seven had multi-hit outings.

Severance 10, Frederick 1, in Severance: Severance won its fourth consecutive game and improved to 9-5 overall, 7-3 in 4A/3A Longs Peak League play. The Silver Knights scored the first six runs in the game and didn’t give up a run until the top of the sixth inning.

7 Roosevelt, 3 Fort Morgan, in Fort Morgan: Roosevelt picked up a quality win against a Fort Morgan team that is ranked ninth in 4A by CHSAANow.com. Trailing 1-0, the Rough Riders gained the edge with three runs in the top of the third. The Mustangs tied the game with one run each in the third and fourth innings. Roosevelt took the lead for good with four runs in the top of the fifth. Sophomore Seppe Salvatore, senior Mario Sanchez and senior Caleb Erickson each had a hit and an RBI for the Rough Riders. Junior Caden Karabensh was effective on the mound for Roosevelt, pitching all seven innings and allowing just one earned run on six hits, striking out seven and walking two. The Rough Riders improved to 6-5 overall, 5-5 in 4A/3A Longs Peak League play.

Highland 15, Clear Creek 0, 5 inn., in Evergreen: Highland scored multiple runs in four of five innings en route to improving to 10-1 overall, 4-0 in 2A/1A Mile High League play. The Huskies were in full control after going up 5-0 in the first inning. They out hit Clear Creek 11-4. Freshman Sawyer Morgan led the way, hitting 2 for 3 with three RBI. Senior Jordan Walkup went 3 for 3 with an RBI and two runs. Six Highland players connected on hits and seven drove in runs. Morgan pitched all five innings, allowing no runs on four hits, striking out 10 and walking one.

14 Longmont, Greeley Central 3, 5 inn., in Greeley: Greeley Central couldn’t keep Longmont off the board, as the Trojans scored multiple runs in every inning except the third. Longmont out hit the Wildcats 11-3. Despite Greeley Central’s struggles, senior JJ Espinoza III had three RBI and a triple on 2-for-3 hitting. The Wildcats fell to 1-15 overall, 0-11 in 4A/5A Northern Colorado Athletic Conference play.

Wiggins 13, Dayspring Christian 6, in Greeley: Wiggins used a pair of big innings to subsequent Dayspring. The Tigers scored five runs in the top of the fourth to go up 7-1. They scored four runs in the sixth to go up 12-4. Freshman Gage Davis led the Eagles, hitting 2 for 4 with three RBI and a run. Senior Tobi Howell hit 3 for 4 with a double for Dayspring. The Eagles fell to 10-5 overall, 5-3 in 2A/1A Mile High League play.

Strasburg 4, Valley 0, in Strasburg: Valley ended up splitting its two-game series with Strasburg after earning a 6-4 win Wednesday. The Indians scored two runs in each of the first two innings. The Vikings fell to 3-12 overall, 2-7 in 3A Patriot League play.

Erie 13, Windsor 4, in Erie: Windsor scored three of its four goals in the second quarter, while Erie scored multiple goals in each quarter. The Wizards dropped to 4-7 overall, 1-2 in 4A Northern Conference play.

Frontier Academy 13, Valley 0, in Greeley: Frontier Academy dominated from the start, scoring all 13 of its goals in the first half. The Wolverines improved to 4-6 overall, 3-3 in 3A Patriot League play. Valley fell to 0-10, 0-8.

3 Fort Lupton, 2 Thornton, in Thornton: Fort Lupton took a 1-0 advantage in the first half, and that proved to be all the difference. Senior Reygan Garcia scored all three goals for the Bluedevils. Seniors Areli Mercado and Aritza Hernandez each had an assist. Fort Lupton improved to 5-5 overall, 2-2 in 4A/3A Colorado League play.

Netherlands 3, Union Colony 0, in Netherlands: Nederland scored all three of its goals in the first half to keep Union Colony winless. The Timberwolves fell to 0-7 overall, 0-4 in 2A Mile High West play. Weld Central dropped to 1-11, 0-4.

Skyview 7, Weld Central 1, in Keenesburg: Skyview scored three goals in the first half and four more in the second to maintain ample separation from Weld Central. The Rebels fell to 5-6 overall, 2-2 in 4A/3A Colorado League play.

Windsor 7, Erie 0, in Windsor: Windsor remained undefeated in duals, 8-0 overall, 7-0 in 4A Region 4 play. The Wizards won in straight sets in six of seven matches. The only match that went three sets was No. 3 doubles, in which the Windsor senior duo of Alexis Backhaus and Makenna Straka defeated sophomores Francie Mueller and Dani Bahensky 5-7, 6-4, 6-4. At No. 1 singles, Wizards freshman Mycah Bisceglia topped sophomore Laina Kitlowski 6-3, 6-2.

Windsor gets just over $1M for hosting Caesars

The Queen to be joined by these royals for Christmas in Windsor?