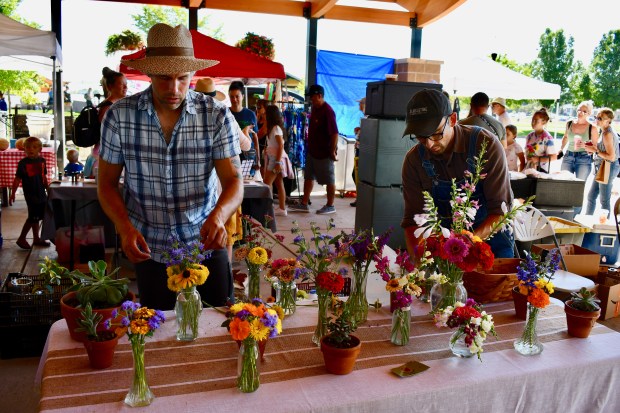 Few things can get people excited enough to get up and out of bed at the crack of dawn on a Saturday over a long holiday weekend.

Happily for area residents, the annual Windsor Harvest Festival is one of them.

At 6 am Saturday, the town of Windsor kicked off festivities to mark the 100th anniversary of the event with its popular hot air balloon launch.

Donning sweatshirts and holding piping hot cups of coffee or hot cocoa, spectators stood around Eastman Park watching pilots and their crews as they quickly and meticulously worked to set up and fill each hot air balloon.

“I’ve always been interested in seeing how they fill the balloons and get everything ready for a flight,” said Dan Nobles from Brighton. “I actually thought it would take a lot more people helping, but they seem to have a system down and know what they are doing.”

As crews continued with their tasks, cheers were often heard as filled balloons slowly rose from the ground to take their positions above the passenger baskets.

As in past years, pilots and crews came from around Colorado and Wyoming, with some pilots being seasoned flyers and some with only a handful of flights under their belts. No matter their experience, all the pilots were eager and willing to chat with attendees.s.

“I’d love to ride in one,” said Rosa Garcia from Evans. “It looks fun, but I think once I got way up there, I would be scared.”

The first Chalk on the Walk event at the 100th anniversary of the Windsor Harvest Festival allowed artists of all ages and skill levels to come out and create their own chalk art piece for a chance to win prizes. (Tamara Markard/Staff Reporters)

As the pilots and their passengers slowly rose into the sky, the crowd below waved and watched the colorful contraptions float off over the town. While the balloons soared off, crews were quick to pack up their vans and trucks to “chase” the pilots and passengers to help with the landing and packing up of the balloons and equipment.

The harvest festival featured a variety of other activities and entertainment over at Boardwalk Park and throughout downtown.

Vendors were set up under the large gazebo at the park with freshly baked bread and pastries, bushels of fruits and vegetables, buckets of flowers, jars of honey and other unique items at the farmers market.

A new feature this year was the Chalk on the Walk contest. Along the sidewalks of Main Street, artists of all ages and skill levels sat on the cement working chalk into the porous paths, creating bright pieces of art.

The contest began at 8 am and allowed artists to work on their pieces until 1 pm, when the pieces were judged. Judges considered each piece’s display of artistic ability and visual appeal. Prizes were awarded to winners in each age group as well as for the best Windsor Harvest Festival 100th Anniversary-themed piece.

Ralph Dobson and his two helpers were camped outside a veterinary office, which was a perfect location because Dobson specializes in creating animal-themed chalk art.

“I do Larimer Square, which is a big chalk art show, and I will be doing a piece at the Pastels on 5th event in Loveland,” he said. “My style is kind of a stained-glass style, and I have been doing this for about 20 years. When it comes to chalk art, because there are children around, the more colorful, the better and animals do really well.”

Ralph Dobson, upper right, works with his helper on a colorful dog portrait during the first Chalk on the Walk art contest at the Windsor Harvest Festival 100th anniversary event. (Tamara Markard/Staff Reporters)

Organizers capped off Saturday’s festivities with a fireworks show over Windsor Lake.

If you missed Saturday’s events, don’t fret because the celebration is set to continue through Monday.

Sunday’s festivities kick off bright and early at 6:30 am with the launching of hot air balloons at Eastman Park, 7025 Eastman Park Drive.

A pancake breakfast presented by the Windsor Community Playhouse will take place from 7-10 am Sunday at the Windsor Rec Center, 250 N. 11th St. All ages are invited to enjoy a plate of flapjacks dripping with butter and syrup for $7 per plate.

From 9 am to 5 pm a variety of arts, crafts, food booths, vendors, rides and games will be available at Windsor Main Park, 300 Locust St.

Sunday’s events will wrap up at 8:30 pm with a relaxing free movie in the park. The event will feature a screening of “Little Rascals” and attendees are encouraged to bring lawn chairs or blankets as well as coolers with food and beverages to enjoy while watching the flick under the stars.

Celebrate Labor Day at the Windsor Harvest Festival with a parade that steps off at 9 am at Walnut Street and Colo. 257. The parade will travel west on Walnut Street to 7th Street, then turn south on 7th Street toward Eastman Park Drive.

The popular event draws hundreds of community members, so you will want to snag your spot early.

After the parade, things return to Windsor Main Park from 9 am to 5 pm for another day of arts, crafts, a beer garden, live music, carriage rides, bingo games and more.

To see the full schedule of events, go to https://bit.ly/3qg0ggJ.