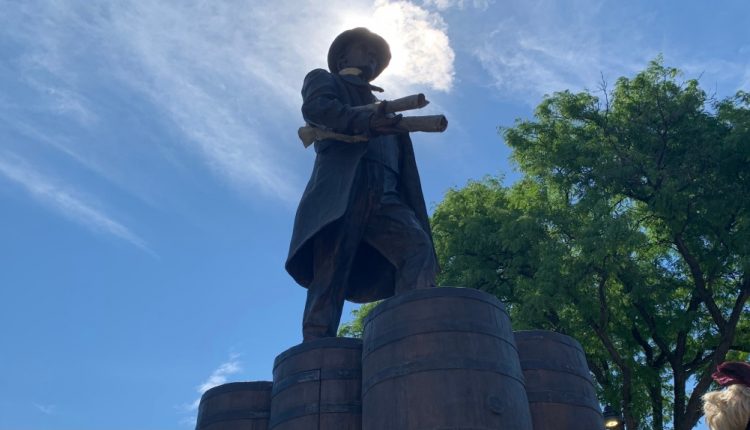 Immortalizing the founder of Walkerville in cast metal has been a task — years in the making, in fact — but a statue of the late Hiram Walker was finally unveiled to the public at a new parquet at his old stomping grounds.

It’s been nearly 206 years since the birth of Hiram Walker and the community came together Saturday morning to get a glimpse of the monument where a young Walker stands mounted on whiskey barrels overlooking the town he built.

“He literally built the buildings and infrastructure that serviced his businesses and in so doing, he built a community,” said Windsor Mayor Drew Dilkens.

Hiram Walker lived in Detroit for many of his early business ventures, but took an interest in the region in the mid 1800s, establishing a distillery, farm and flour mill in Canada. He later founded the area now known as Walkerville, which amalgamated with Windsor in 1935, years after Walker’s death.

But during the decades of his interests in the region, the whiskey baron made an indelible mark on the community.

“It’s been just an incredible legacy he’s left since 1858 in our community and today we get to celebrate them and everyone who is here is so proud and so excited to see this today,” Dilkens said.

On hand for the unveiling was Walker’s great-great-granddaughter, Pamela Morse, who lives in Michigan.

“Oh, it’s remarkable, we’re so proud,” she proclaimed after setting eyes on the statue.

The monument cost $400,000, half of which was offset by private donors and partly funded through the City of Windsor public art endowment fund.

Artists Mark and Laura Williams were tasked with depicting a younger Walker his in 50s based on a picture supplied by the Canadian Club Brand Centre. That’s how old Walker was when he saw opportunity in southwestern Ontario.

“He’s carrying a set of blueprints of Walkerville, and he’s walking out to make sure everything’s going correctly,” Mark said.

“It’s nice to see the young Hiram Walker, instead of the gentleman that we all know with the white beard as he got older, but this is a middle aged man, and he was a pioneer,” said Tish Harcus of the brand centre, noting that photographer is now locked in the club’s vault for safe keeping.

The monument stands at a new parquet named for Walker at the corner of Devonshire Road and Riverside Drive, a stone’s throw to his old distillery and the historic Walker power building.

“He’s a person of Canadian national heritage and significance,” said Jake Rondot, who chairs the Walkerville Business Improvement Association. “We’ve very excited that this parquet could get developed and help develop this site here with the power building.”

“It speaks to how connected they are to this man, this distillery and the livelihood that he’s created for generations,” said Dilkens.