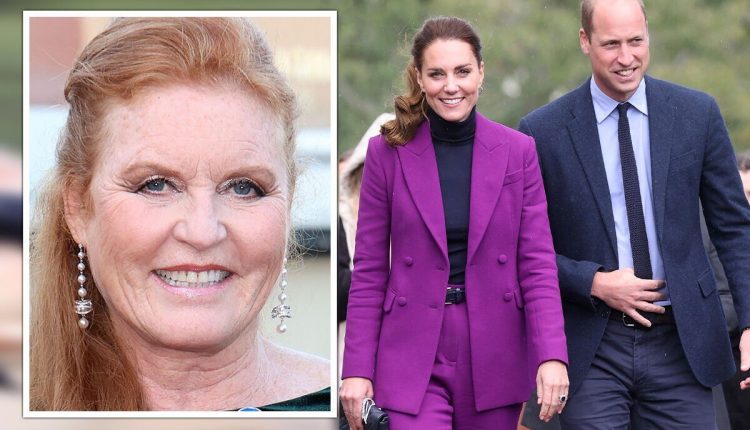 Kate, the Duchess of Cambridge and Prince William have been tipped to be moving closer to the Queen at Windsor whilst maintaining their offices at Kensington Palace. The Duke and Duchess of Cambridge have been reported to be considering Adelaide Cottage, which incorporates parts of the original Royal Lodge. The re-erected version of Royal Lodge is currently the home of Prince Andrew and Sarah Ferguson but royal commentator Rachel Bowie suggested a swap could be taking place after Fergie bought a new property in Mayfair.

The Royally Obsessed host said: “It’s in Grosvenor Estate, which funnily enough is owned by the Duke of Westminster, who happens to be Prince George’s godfather, and William and Kate’s friend.

“The speculation is they didn’t pay full price for this and they got a good deal because, ‘hey, help my aunt, she needs a house.’

“It is interesting because there’s a lot of talk about the Cambridges moving into Royal Lodge.

“Supposedly, Andrew and Fergie are staying at Royal Lodge for now but if they had this other home is the plan maybe they can move into this Mayfair place and the Cambridges could move into Royal Lodge? Who knows.”

They would also benefit from closeness to Her Majesty as well as other members of the Royal Family and Kate’s own parents, Michael and Carole Middleton.

Prince Edward and Sophie, the Countess of Wessex live in nearby Bagshot Park with their children, Lady Louise and James, Viscount Severn.

And Princess Eugenie has been leasing Prince Harry and Meghan Markle’s Frogmore Cottage with her husband Jack Brooksbank when not residing in Portugal.

According to a source close to the couple, Kate and William are “extremely excited” about the move to Windsor.

They told US Weekly: “The whole family are extremely excited to be moving to Windsor.

“Not just because it will bring them closer to the Queen but it’s a perfect happy medium that brings them closer to London than if they chose to settle full-time in Berkshire or Amner Hall”.

The insider added: “They’ll still get to enjoy those locations, of course, but by being in Windsor they’re only 20 miles from Central London and Buckingham Palace.

“And it’s a beautiful environment that’s steeped in history and such a special location to call home”.