The Princess of Wales revealed she is “excited” about an upcoming campaign as she hosted her first meeting at Windsor Castle since she and Prince William moved to nearby Adelaide Cottage last summer.

Kate, 41, met a group of eight experts from across academia, science and the early years sector, who have been appointed to advise the Princess on the work of her Royal Foundation Center for Early Childhood. See her arrival below in the video…

It came as Kensington Palace said that Kate’s work through her Royal Foundation Center for Early Childhood to promote the importance of the first five years of a child’s life is being accelerated.

Full details about the new campaign were not given but Kate told the group: “I am really excited for next week, there is lots coming out.”

It comes after the Prince and Princess of Wales penned a personal Twitter message to New Zealand’s outgoing Prime Minister, Jacinda Ardern, following the announcement of her resignation.

The Princess stepped out in a tuxedo suit and a very affordable bodysuit for my meeting. She also accessorised with a pair of pearl earrings.

Kate told the group: “Today I just want to think about and discuss what next, really. How do we keep this conversation going?

“This campaign’s really to try and raise the awareness of the importance of this issue. And it’s sort of what can we do collectively to keep the conversation going and what we do next.

“This campaign is really laying the foundation of why early childhood matters.” 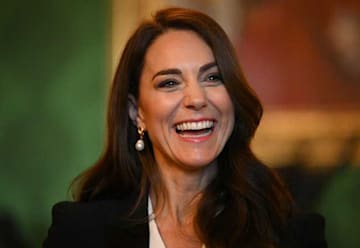 The royal mum-of-three said it is about what shapes helps us, what shapes our relationships, and the emotional experience of childhood and about creating the “building blocks and the scaffolding” for how we first start to understand ourselves and others.

“These are really complicated, big issues to look at,” she said. “But I think, from the centre’s point of view, one of the main key areas is how do we develop the social and emotional skills which are vital for later life. How do we better manage and regulate our emotions? How do we build better relationships?”

She said they are dealing with “big questions, big topics” which are “complicated”. 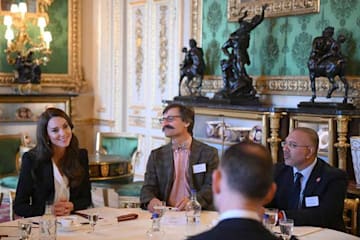 The meeting took place in Windsor Castle’s Green Drawing Room, where some of the most famous portraits of the late Queen Elizabeth II were shot. 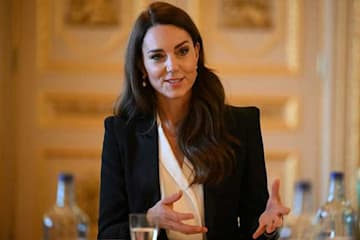 The center stems from research which shows that the first five years of childhood fundamentally shape adulthood, with social challenges such as addiction, violence, family breakdown, homelessness and mental health having their roots in the earliest years of life.

The Princess shared a personal tweet after her meeting, writing: “An insightful first meeting with our @Earlychildhood Advisory Group, discussing a shared passion for the extraordinary impact of the first five years of life and its role in shaping us. Very exciting things ahead…!”

Listen: The Harry and Meghan A Right Royal Podcast special

Make sure you never miss a ROYAL story! Sign up to The Royal Explainer newsletter to receive your weekly dose of royal features and other exclusive content straight to your inbox.