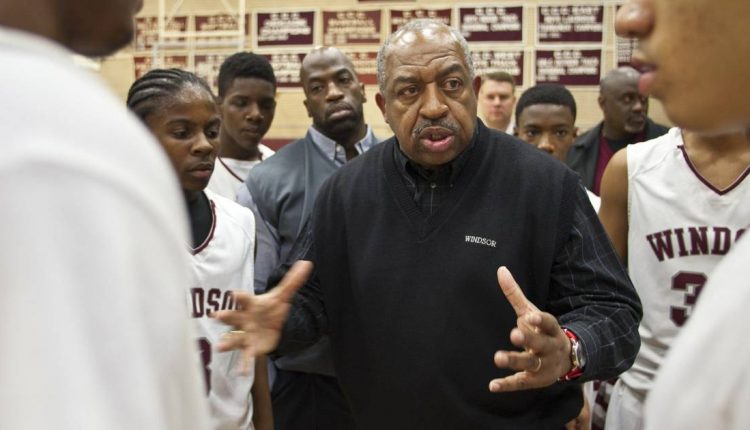 When Windsor’s former athletic director Bill Lesinski hired Ken Smith away from Rocky Hill to be his boys basketball coach in 1989, Smith said he only had one objective in mind.

“They [Windsor] had no banners in their gym at that time. I came from Rocky Hill where they had the bands playing and the cheerleaders cheering and all the fans packing the house. And that’s what I wanted for Windsor. And now, I have one more year to go.”

That he does. With more than 500 career wins and four state championships in Class LL and Class L, Smith needs just one more league title to win his 20th. Perhaps the 2016-17 season will provide that.

During the years he has strolled the sidelines, he has become synonymous with success, developing a reputation as one of the state’s most respected coaches. He has more than fulfilled his commitment to Windsor High.

And Windsor High loves him, as demonstrated by his decision to name the basketball court “Coach Smith Court” in honor of his meritorious service and record.

“After more than a quarter-century here, we all felt strongly about naming the court after him,” said Steve Risser, Windsor’s current athletic director. “I’m glad Coach Smith was OK with the entire concept because we think its a nice living tribute to what he’s meant to the community.”

“All it means to me is that I’ve had some good players in the past,” Smith said the night of his 500th. “They’re the reason why I got 500 wins. They were the kids who listened a lot and spoke a lot. I probably can name a bunch of them. They were the guys who got me where I am today

But there is more to Smith than just his contribution to the basketball program. For just as long as he has been coaching he has been dedicated to the betterment of his players and his community.

“I just wanted to make them better people so they could be an asset to the community,” Smith said of his players. “And I’d say we’ve been pretty successful in that goal. But you always need help to do the right thing. I want to be there for those who need help to do the right things for the community. I want to be that example for them. I want when they see me, and they are doing the wrong thing, they will be encouraged to do what’s right instead.”

Some of the ways Smith has paid back the community are holding clinics for its children and, most notably, a preseason basketball scrimmage that befits the Windsor Food Bank.

“It’s been a tradition here,” Risser said. “A lot of people don’t know about the great things Kenny does for our community. He’s really a generous and warm man. Not only is he a remarkably successful basketball coach, but he gives back a lot to the kids.

“His classroom is the basketball practice. He’s teaching our kids life lessons and what he does with them every day is a phenomenal thing for me to see.

“In the preseason he holds a basketball jamboree where he hosts various teams from around the state. And the other event is the one where he invites teams into Windsor and they bring with them nonperishable items for the food bank. The coaches that come support the effort very well. It’s a food drive scrimmage in effect. A lot of the same teams come back every year in support of it.”

Smith said the event held for the food bank has basically spanned his coaching career. He said its genesis was the idea of ​​trying to do something to get college coaches to come and see the kids in the state play.

“We wanted to bring quality basketball to Windsor,” Smith said. “It started with a couple of friends of mine in the coaching business, Charlie Bentley [Harding] and Tom Fleming [HIllhouse]. We tried to figure out a way to get our kids seen by college coaches.

“So we planned a clinic that brought in some state college coaches to see us under the name “Hoop for Food.” Eventually we found out it was a violation for the coaches to be there. So what eventually happened was we just had the kids participate in the clinic and after played some round-robin basketball and we asked that those who attended would bring canned goods as donations.

“We’ve been doing it for just about all the time I’ve been at Windsor. All I want to do is to teach my kids to be more accountable to those who are less fortunate.”

In the end, that’s perhaps the greatest accomplishment of Smith’s distinguished career. Not only has he brought winning basketball to his town, he has encouraged a selfless, winning attitude that stresses the good of the community above all else.

“We’ve also tried to help in other ways. Back in the day, if someone in our community would have trouble like a kitchen fire we’d go in and help out,” Smith said. “We used to do a lot of yard work in the community for the elderly who couldn’t do for themselves. We still try to do as much of that as we can.

“We do a lot of things, but I don’t look for any pat on the back. That comes with the territory. Our job is to make the world a better place to live. I call myself the village coach.

“You know what they say, it takes a village to make a child … Well, I’m the village coach.”