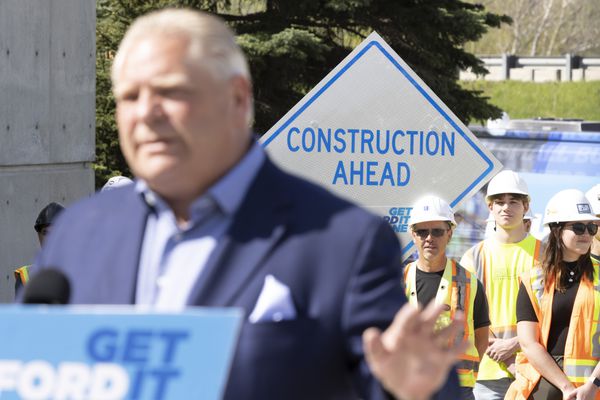 Doug Ford took the Progressive Conservative re-election campaign to Windsor Friday morning to reiterate what he says is his party’s commitment to the manufacturing sector.

The PC leader announced plans to fast-track transmission lines in the area to provide power to coming projects such as the Stellantis-LG plan, which would make batteries for electric vehicles.

The $5-billion plan was announced in March and is scheduled to launch in 2024, but there are questions surrounding the city’s capacity to run a proposed LG Chem plant that Windsor is trying to attract.

In the Ontario election, 1.5 million ways to fix housing. Will it happen?

Stephen MacKenzie, president and CEO of the economic development organization Invest Windsor-Essex, has been speaking to local outlets about how Windsor has lost its chance to be a potential site for the supply plant, a $2.5-billion project that could generate more than 1,000 jobs, because of lack of electrical power.

But Mr. Ford’s team disagreed, saying after the campaign event that talks are continuing.

Mr. Ford referenced a $1-billion provincial plan – made last month – to bring five transmission lines to the area. “We have three transmission lines moving forward in a rapid fashion and that’s going to be able to handle all the electricity needs that are needed in Southern Ontario,” Mr. Ford said at the event, adding that the remaining two are ready when required.

Windsor Mayor Drew Dilkens endorsed Mr Ford, who is hoping to snap up NDP votes from the area.

NDP Leader Andrea Horwath was also in Southern Ontario Friday, making an announcement in Chatham-Kent about home care for seniors. If elected, Horwath’s party says it plans to spend $1-billion for improvements to the system.

“Nobody wants to be pushed into a long-term care home, or stuck in a hospital bed without the option of staying at home,” Ms. Horwath said.

Some measures in the plan include a property-tax deferral program for seniors who wish to stay at home, projected to save them more than $300 a month. The party also says it would provide caregivers a monthly benefit of $400 for low-income families.

The NDP says it plans to improve the situation for personal support workers, hit hard by the pandemic. Results from an annual members’ survey by the Ontario Community Support Association released earlier this year noted that in 2021 the vacancy rate of full-time personal support workers in Ontario was at 14 per cent, more than triple that of the previous year.

In an effort to shift home care from a for-profit model to non-profit, Ms. Horwath has also promised to boost the hourly wage of PSWs by $5 (the average in Ontario is $18 an hour) as well as provide compensation for their Travel and address scheduling issues.

The NDP has yet to release costing for their full platform, something Ms. Horwath maintains is coming soon.

Affordability was the thrust of Liberal Leader Steven Del Duca’s campaign announcement in Toronto’s east end on Friday, as he unveiled a plan to reinstate rent control for all properties.

If elected, Mr. Del Duca said he will put more resources into enforcement of “bad actors in this industry” as well as clear the backlog of cases at the Landlord and Tenant Board. His party, he added, would provide a legal framework for those who wish to engage in rent-to-own properties.

The proposed measures are part of his party’s housing-affordability plan, which the Liberals say would build about 1.5 million homes in a decade.

Mr. Del Duca also says his party would make Sept. 30, Truth and Reconciliation Day, a statutory holiday in Ontario, as well as study the idea of ​​a four-day work week through a pilot project.

Mr. Ford, asked during his Windsor visit about his position on a shortened week, said that’s up to companies to decide.

Green Party Leader Mike Schreiner was in Guelph Friday, where he announced plans to double monthly social assistance, citing increased food-bank use as part of his rationale. According to Feed Ontario, an association of food banks and industry partners, food-bank visits went up 12 per cent from 2020 to 2021 in the province.

The increased assistance rates, Mr. Schreiner said, would be indexed to inflation. “We would also triple the exemption level before clawbacks start on people’s earnings,” he said during the announcement.

He added that the plan, in partnership with the federal government, would lay the groundwork for a basic income.

Want to hear more about the Ontario election from our journalists? Subscribe to Vote of Confidence, a twice-weekly newsletter dedicated to the key issues in this campaign, landing in your inbox starting May 17 until election day on June 2.