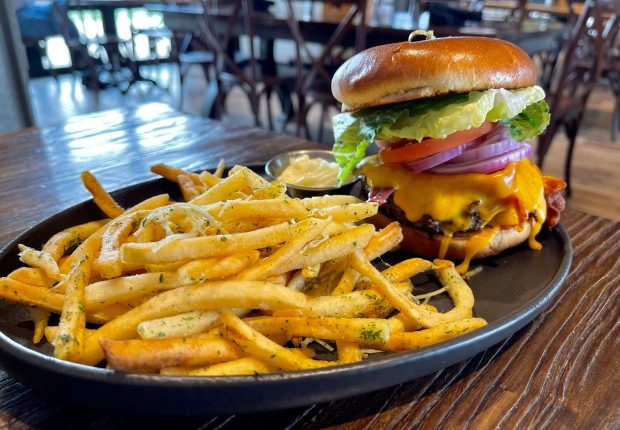 Catching a fish and having it cooked up for dinner might be one of the most chill — and fresh tasting — experience meals around.

Most likely, you’d expect to find a restaurant with a hook-and-cook program near a marina or lakefront, but sometimes, a little ‘ol pond close to home might surprise you.

There’s precisely such a little ‘ol landlocked pond a short drive from Greeley at Ted’s Sweetwater Grill at Windsor’s RainDance community. The pond is one of the man made bodies of water dotting the Water Valley development.

The family neighborhood restaurant on the corner of Crossroads and Covered Bridge Parkway sports its own bait shop next to the restaurant patio. Ted’s Trout Pond is stocked with rainbow trout from a Nebraska fish farm and receives about 500 stock weekly. At any given time there are approximately 1,000 fish waiting for a hook.

Matt Nagle, manager of food and beverage at RainDance, said most people take their catch home after the restaurant cleans it and puts it on ice. But the grill can also beer-batter and fry your catch, and then serve it up fish-and-chips style with fries and a side of tartar sauce.

Carter Emsing, one of the anglers working at the bait shop, said summer is busiest, with at least 100 fish caught each week.

“The anglers try to figure out how the trout are acting and assist the kids who come in to fish,” he said.

Any age can cast a line, although Emsing said the majority of people fishing are kids or those without a lot of fishing experience. After a trout is hooked, guests are asked to reel it in and either keep it or if they don’t want it, they can donate the fish to the Rocky Mountain Raptor Program in Fort Collins. Guests are not permitted to catch and release.

To fish, a $12 day pass is required, which includes admission to the private pond, a fishing rod and bait and tackle donated by Scheels. There is a refundable $40 deposit for the fishing equipment. The cost of the fish depends on how big a whopper you catch — it’s $1.25 per inch and you pay for what you pull out of the water, which Emsing said ranges between 11-20 inches.

The entrance to Ted’s Sweetwater Grill in Windsor at RainDance sets the theme for a relaxing meal. There are also Colorado Cherry Company products available for purchase on site. (Photo credit Emily Kemme)

It costs $3 to have your fish cleaned to take home, or you can have the chef at the restaurant cook it for you. Drop a line, pull your dinner out of the water and then sit back, relax and ponder the hodgepodge of found objects hanging from the restaurant’s rafters while you’re waiting for your meal.

For non-anglers, Ted’s all day menu, designed by executive chef John Wightman, is varied, but showcases ingredients that were cultivated or raised in Colorado.

There are a raft of burgers, including Grandma’s Burger, the house sweetheart, topped with brie, fig spread, spinach and lemon pepper aioli. Fish and seafood keep the water theme afloat, no tackle required. Try the blackened shrimp tacos with carrot-cucumber slaw and spicy Thai chili aioli or fish tacos with either trout or walleye.

Landlubbers (non-fish lovers) can get the same taco preparation with grilled chicken.

Classic bites include a Cobb salad, and shareables like shrimp cocktail, cheese curds and spinach and artichoke dip.

After 5 pm, the menu expands but stays the course with fish, including seared walleye or scallops and steaming Cioppino brimming with shrimp, clams, mussels and walleye in a spicy tomato broth. There’s also Colorado-raised steak frites prepared with a 10-ounce ribeye served with truffle fries.

On the weekend, the grill offers brunch with hearty omelettes, eggs Benedict and biscuit & gravy — all which come with a satisfying mound of green chile cheddar potatoes served hash style. The sweet toothed will be completely satisfied with pound cake French toast and brunch purists will enjoy another fishy menu choice: smoked salmon with capers, egg and cream cheese on a bagel.

The brunch menu also serves burgers, tacos and a Reuben, because it’s common knowledge that people’s hunger juices get revved up at different times on weekends.

Ted’s Sweetwater Grill was formerly the Colorado Cherry Company, which still operates out of Ted’s kitchen as a commissary to bake their beloved pies and treats. A cherry pie store in the entrance sells pies, fruit salsas and candy.

Ted’s is named in honor of Windsor developer Martin Lind’s father, Ted Lind, who farmed the neighborhood where the restaurant now sits, raising wheat, corn, pinto beans and sugar beets, according to the website.

That farm-to-table theme is incorporated into living in the RainDance community; Residents can pick cherry and plum trees when in season. Behind Ted’s there is an actively farmed corn field; the week of Halloween brings Octoberfest with a corn maze and big family celebration at the restaurant.

But the hook-and-cook experience slows down time, recalling days when life was slower and our relationship with the land around us seemed closer. In a sense, it’s a chance to take a mini-vacation, just minutes from home.

Other details: Inside and patio dining (overlooking the water) | Full bar with craft cocktails, beer, wine

RainDance residents get the first five inches of their catch free with their River Resort pin number. Water Valley residents can receive the same offer with their rec pass | Follow on social media for events | Tent available for private parties | Check website for additional fishing details