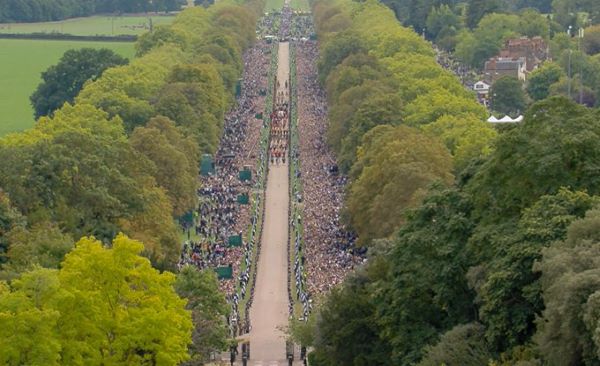 King Charles and members of the royal family bid a final farewell to the Queen as she was laid to rest beside her “strength and stay” Prince Philip on Monday evening.

The burial service was held privately in the King George VI Memorial Chapel at Windsor Castle. Her coffin was lowered into the royal vault 16 feet beneath St George’s Chapel after a committal service.

King Charles stood firmly with his closest family members for the hour-long service. As many as 800 mourners filed into the gothic chapel where the Queen stood little more than a year ago to bury her husband.

More than 250,000 people lined up to see Queen Elizabeth II lying-in-state at Westminster Hall that underline the enormous public response and respect to the late monarch.

Culture Secretary Michelle Donelan revealed the number on Tuesday morning – a day after 10 days of national mourning ended with the Queen’s burial at Windsor and after a grand state funeral.

Local newspapers said although the number of people who queued for hours for the chance to see the Queen’s coffin, draped in the Royal Standard, was only 50,000 more than the number who saw the Queen Mother’s lying-in state in 2002, Ms Donelan said the figures were “remarkable”.

During the four full days of the lying-in-state, the queue stretched for more than five miles along the Thames with some waiting for 24 hours to see the Queen.

Mourners leave floral tributes to the Queen at Windsor Castle

Advanced voting in Windsor this week