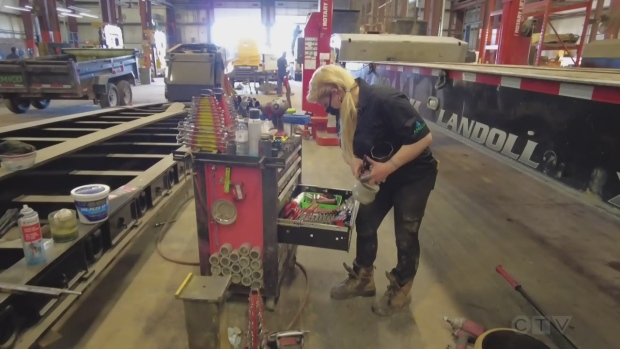 WINDSOR, ONT. — Cynthia Urbano recognized a need in the skilled trades sector and capitalized on the opportunity to realize a lifelong dream.

“The whole time I kept saying I wanted to do mechanics. I wanted to be a mechanic but it’s not a woman driven trade and being a first generation Italian it wasn’t really acceptable,” said Urbano.

The single mother of four was a Personal Support Worker and found the profession rewarding, but , deep in her heart was the pressing question, “What happens if I never get the opportunity to really try what I want to do?”

Three years ago, at the age of 41, Urbano decided to look into it. With the help of Service Ontario, she found a women in trades truck and coach technician program at St. Clair College. She applied and was accepted. Urbano downsized her home and moved closer to school in order to help finance the career change.

“You just save your money and you don’t buy shoes and you buy tools” Urbano said. “The government has great incentives for you to go into apprenticeship. They give you grants so it was a no-brainer”.

Urbano is happy she made the move. No regrets. Her employer is the recipient of a galvanized worker. “She chose to enter the apprenticeship program. She’s taking some courses. She’s here basically working with us, learning with us,” said Carlo Gualtieri, manager at Amico.

He points out that regardless of what trade someone looks into, “there’s a job at the end of it. I don’t care what you take. Heating and cooling, plumbing, electrician, technicians for all the things we work on. There are jobs.”

Ontario Minister of Labor Monte McNaughton talks enthusiastically about the opportunities in the skilled trades field.

McNaughton says prior to the pandemic there were 200,000 jobs a day going unfilled costing the Ontario economy $24 billion a year.

“One in three journeypersons today is over the age of 55 and the average age of an apprentice in Ontario is 29,” McNaughton pointed out. “A career in the skilled trades is meaningful, lucrative.”

“I love it. I learn something new every day,” she said. “Try it. You might love it. It’s also some knowledge under your belt put on your resume.”