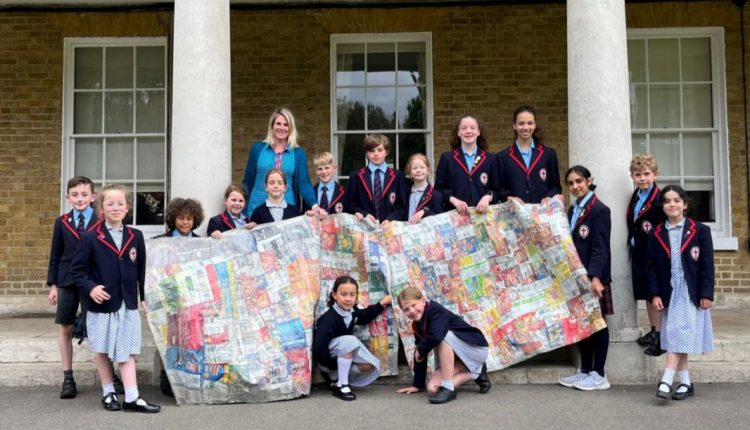 SCHOOL students in Windsor made two blankets out of used crisp packets to donate to a homeless charity.

The blankets, which were each made from over 100 crisp packets, were originally inspired by a story explaining the process on BBC Newsround earlier in the year.

And a group of 15 children, aged from seven to 13, spent several hours washing, cutting and ironing them all together.

The resulting blankets, which were collected by Dr Natasha Price, parent to two children at the school and a local GP and clinical lead for outreach to the homeless.

Dr Price then passed these on to Pilgrim Hearts Trust during one of her mobile clinics for the charity, who have since distributed them to people in need of shelter.

“I am so immensely proud that the children’s hard work has benefited such a worthwhile cause.

“It required real commitment from the children to put the hours in that were needed and not only have we helped two people to stay warmer as a result, we have also prevented over 200 crisp packets from ending up in landfill.”

In addition to making blankets, the Eco Club have also been working on creating eco bricks which they plan to use to build a bench in the school playground.

Both initiatives are part of the school’s drive to become an Eco-School and earn a coveted Green Flag Award. Founder of Pilgrims Hearts Trust Elaine Chalmers-Brown said:

“Pilgrim Hearts Trust exists to give a hand up not a hand out to the homeless and those on the edge of society.

“Dr Price’s outreach clinic at our drop in service is a great benefit to our guests and the blankets made by the children at St George’s School Windsor Castle will be extremely useful for the homeless men and women sleeping rough in cold, wet conditions.”