Leah Garrod was just a few blocks from home in the early morning hours of April 4, 2014 when calamity struck. 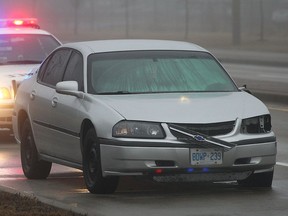 The damaged Chevy Impala involved in a two-car crash on Lauzon Road on April 4, 2014 is seen in this file photo. Photo by Dan Janisse /Windsor Star

Leah Garrod was just a few blocks from home in the early morning hours of April 4, 2014 when calamity struck.

Garrod and three friends from work at Tim Hortons at Lauzon Road and McHugh Street headed to a downtown nightclub after their shifts. They met up with other friends to drink, dance and mingle.

On the way home, the car Garrod was traveling in crashed. Just 19 at the time, Garrod spent the next nine months in a wheelchair.

Superior Court has heard Colthurst was the driver of a Chevy Impala that was southbound on Lauzon Road when it collided with Crosby’s Chevy Blazer near Tranby Avenue. Data from the Impala’s black box showed the car was traveling 106 km/h at the point of impact. The section of Lauzon Road where the crash occurred has a posted speed limit of 50 km/h.

Garrod and other witnesses tested the vehicles were side by side when the collision occurred. Yet Garrod tested the Blazer was going the speed limit and there was nothing out of the ordinary about the manner in which Crosby was driving it.

“I disagree,” said Garrod emphatically when defense lawyer Brian Dube told her the Blazer was traveling in excess of 100 km/h.

“I believe he was going the speed limit.”

Garrod testified she first noticed the Impala on Lauzon Road. The Blazer was in the passing lane and the Impala was behind it.

The Impala pulled up on the right, accelerated ahead, then slowed again.

“It decelerated, then impact,” Garrod said.

The sideswipe caused the Blazer to travel straight through a curve, hitting a light post in the median. The Blazer flipped, landing on its roof.

Garrod injured both her feet, her right foot requiring surgery. Pregnant, due to give birth Friday, Garrod said she will require more surgery once her baby is born.

Garrod said she remembers the light post coming straight at her. She hit her head and blacked out.

Garrod said she could not walk after the crash. She used a wheelchair for nine months, slowly graduating to a walker, a cane, then a walking boot.

She still aches, but she can’t take pain medication while pregnant, she tested.

Garrod said she wasn’t even feeling a “buzz” after drinking four vodkas with cranberry juice over about three hours at the Voodoo nightclub that evening. The friends met at the entrance of the bar at closing time, walked to the Blazer and stopped at a nearby McDonald’s before heading home.

The friends all lived in the east end of the city. Garrod, who lived near Lauzon, was to be dropped off first.

Crosby was playing his Beyonce CD and the friends were singing along. Garrod said she had her window open a crack to ash her cigarette.

A passenger in the Impala who tested earlier in the trial said Garrod was dancing wildly in the vehicle, hanging out the window. “False,” Garrod tested Tuesday. Garrod also denied she shouted a racial slur at Colthurst when he pulled alongside the vehicle.

Cafes in Slough and Windsor to visit this weekend