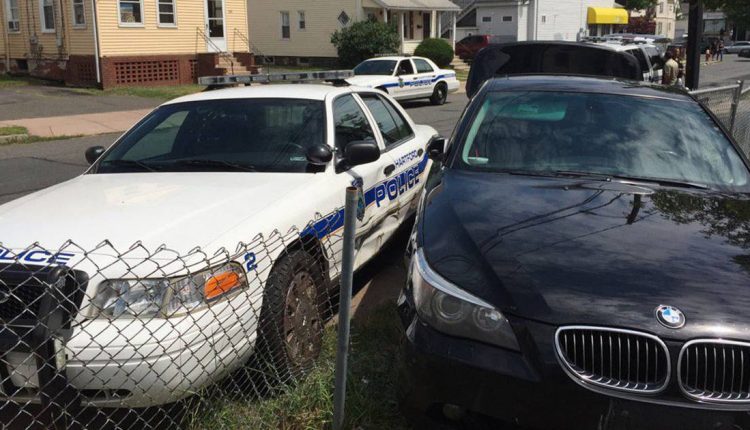 HARTFORD — Police on Friday chased the private car of a fellow officer after the BMW was stolen overnight from the officer’s home in South Windsor.

The driver was taken into custody, but not until after he rammed a patrol car, police said. No one was seriously injured.

The BMW had at least one police badge and handcuffs in it, but “no gun that [police] are aware of,” said South Windsor Deputy Chief Scott Custer.

The handcuffs remained in the heavily-damaged car after it came to its final stop on Standish Street late Friday morning. The status of the badge, and whether there had been other police equipment in the car, remained unclear.

The car theft — and two others — happened overnight in the Foster Road area of ​​South Windsor, Custer said. A group of teenagers is suspected to have swept through the neighborhood.

The officer’s car was unlocked and its keys were left inside, he said.

The other two stolen cars turned up in Hartford Friday morning, and when South Windsor detectives went to the city to continue their investigation, the stolen BMW drove by, Custer said. The South Windsor officers followed it a short distance, but declined to chase it when it sped off, he said.

Later, about 11 am, the BMW was again spotted in the city. Police chased it around the South End for roughly 10 minutes until it collided with a patrol car on Standish Street and came to a stop.

Officers took the driver into custody. His identity and charges weren’t immediately clear.

Hartford Deputy Police Chief Brian Foley said the suspect is from Bushnell Street, which is near the crash scene.

Tiesto to perform at Caesars Windsor in July