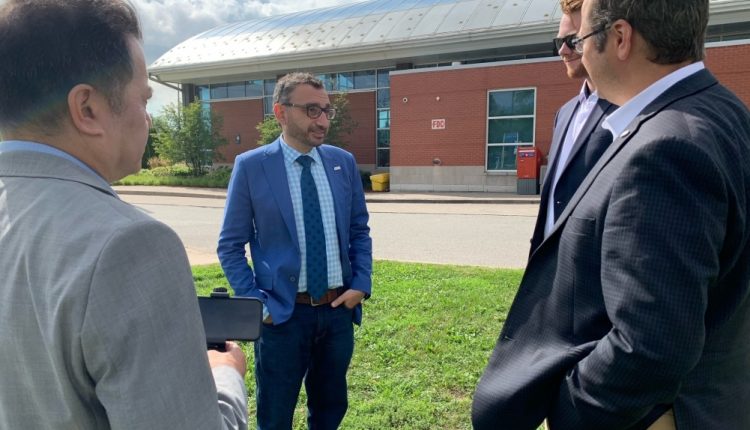 Transport minister defends use of ArriveCAN app during visit to Windsor

Canada’s federal Transport Minister Omar Alghabra continued to defend the government’s use of the ArriveCAN app during a two-day visit to Windsor, Ont. Tuesday.

Alghabra reiterated it’s a tool that is meant to improve efficiency for travelers while the need for a vaccine certificate remains in place.

“We’ve done things during the pandemic that I never thought we as a country or the world would do,” Alghabra says. “And everything we’ve done, our government’s done, is kept in mind the health and safety of Canadians.”

This, after a constitutional rights group launched a legal challenge last week against the federal government’s requirement that travelers to Canada use the app and that unvaccinated travelers quarantine for 14 days.

Alghabra adds, “Courts and labor tribunals and other bodies have looked at the justification for mandates and for other public health measures and found them to be constitutional given the situation that we’re in.”

Minister of Transport Omar Alghabra in Windsor, Ont., on Tuesday, Aug. 30, 2022. (Chris Campbell/CTV News Windsor)The minister continued, “I’m glad we have an independent judicial system for people to challenge and test things. But I can assure you that every time we do anything, especially during the pandemic, priority was guided by saving the lives of Canadians and in a measured and a prudent way.”

Meanwhile, several community and business leaders in Windsor-Essex continue to stress they believe the app is hindering the region’s ability to fully recover from the pandemic.

“We’re listening. We want to do what’s right,” Alghabra explains. “We want to keep Canadians safe. And we also want to make sure that we enhance efficiency and the experience of travelers so we’re certainly listening and we’re working with our stakeholders.”

Windsor-Tecumseh MP Irek Kusmierczyk says Alghabra and several other federal ministers have heard a similar concern that is reiterated in Ottawa.

“Obviously we’ve heard a lot overwhelmingly from local residents and local businesses that are saying, ‘Look, this really is a barrier,'” he says.

Kusmierczyk adds, “Border communities have experienced COVID quite differently than other Canadian communities.”

He says he’ll continue to reiterate local concerns with the federal government, while the app is up for renewal next month.

“My sense is that they understand and that the ministers are really listening to what our community members are saying and what we’ve conveyed,” Kusmierczyk says. “And I will be watching very keenly when the order in council is reviewed in September for the border measures, and we’ll be paying very close attention to that.”