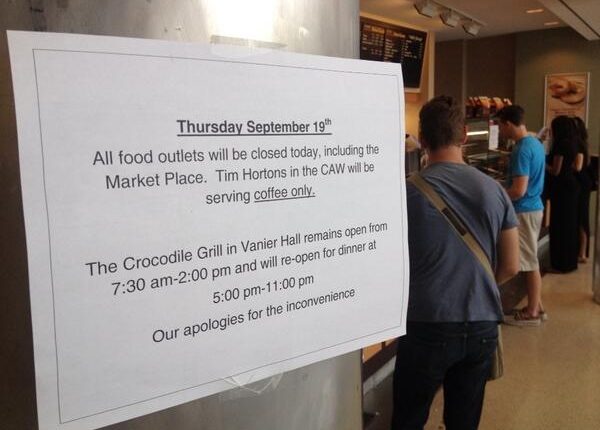 Most food services at the University of Windsor are closed down as CUPE local 1001 workers choose not to cross the picket lines on Thursday.

The workers are supporting the 11-day strike by CUPE Local 1393 members. The university says there are no new bargaining dates for CUPE 1393.

“After a meeting with the mediator this week, the university is not confident at this time that CUPE 1393 has the flexibility needed to meaningfully address the issue of bumping and job evaluation,” said the university’s chief communications officer, Holly Ward.

Talks continue with CUPE 1001 this week with the assistance of a mediator, which are scheduled until Friday. The university remains confident that an agreement can be reached with this group, says Ward.

“I wouldn’t offer it to my dead dog,” said CUPE 1001 President David Montgomery on the university’s latest offer.

Thousands of students ate free hot dogs at a CUPE barbeque on campus.

The Tim Hortons is still open for coffee and the Crocodile Grille will reopen from 5 pm until 11 pm Full service is expected to return Friday.

Explainer: Why carpenters in Windsor-Essex-Kent are on strike