Warhol in Windsor: 27 Warhols and more at the Art Gallery of Windsor

This article is Sponsored

by Art Gallery of Windsor

The June 2-Sept. 30 AGW exhibit The Sandwich Project will include 27 original works of Andy Warhol as well as four other exhibits themed around food as a metaphor for economic consciousness. 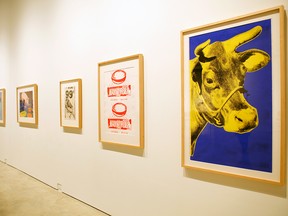 The largest collection of Andy Warhol works local residents have ever seen will be on display at the Art Gallery of Windsor beginning this week.

From June 2 to Sept. 30, you’ll be able to experience 27 of the famous artist’s original pieces as part of The Sandwich Project, a two-year exhibition focused on food and its implications on culture and society.

“In 2017, The Sandwich Project explored food in relation to identity politics,” explains Jaclyn Meloche, who is spearheading the project as curator of contemporary art at the Art Gallery of Windsor. Food is seen “as a political vehicle through which to map history and challenge gender stereotypes,” she says, adding last year’s exhibits acknowledged Canada’s 150th anniversary celebration and the many identities that make up Windsor.

This year’s continuation of The Sandwich Project considers the ways in which food is a metaphor for economic consciousness, she continues.

“Through themes of food sustainability, consumerism, and consumption, this summer’s exhibition considers the effects of food on a community, a culture’s economic growth, and the overall well-being of the body.”

As part of The Sandwich Project, the Art Gallery of Windsor is partnering with The Andy Warhol Museum in Pittsburgh, the largest museum dedicated to a single artist in North America.

One of five exhibits in this year’s The Sandwich Project is Andy Warhol: Printed Food Matter, an exhibition of iconic works that serve as a historical reference to the culture of food while the other exhibits take on more contemporary perspectives, says Meloche.

Food is an accessible subject matter, which makes The Sandwich Project something everyone can relate to and appreciate in some way.

“Everybody eats and everybody has a relationship with food, yet all of these relationships are complicated,” says Meloche. “Food is social, cultural, economic, geographical, political, and arguably gendered. In order to speak to each of these notions, I chose to deconstruct the subjects of sandwich and food in 11 unique exhibitions.”

According to Meloche, Warhol’s work in the 1960s – such as the classic Campbell’s Soup cans images – explored food, food labels, and food economies as metaphors for middle-class American consciousness.

“Through his commitment to repetition – the repetition of food, animals, icons, brand names, and slogans – he created a visual language through which to critique the effects of mass cultural production.”

While commenting on the false assumptions being made by manufacturers and marketing firms, Warhol believed that through commodification he could appeal to, and capitalize on, the middle class, says Meloche.

“In hope of demystifying the politics of branding, Warhol appropriated imagery from popular culture to challenge the inherent social hierarchies being perpetuated in the 1960s.”

Jose Diaz, chief curator at The Andy Warhol Museum in Pittsburgh, says The Sandwich Project is a wonderful collaboration of history, food and art – and a perfect fit for the Warhol exhibit.

“Warhol has a deep relationship with food, from Campbell’s Soup and Coke bottles, all the way through his late career where you see the reappearance of updated versions, such as a powdered version of Campbell’s as

well as New Coke, which was a market flop,” says Diaz.

According to Diaz, the Warhol works on display for The Sandwich Project feature a broad range of foods as subject, their role in popular culture, and most importantly through the lens of Andy Warhol, one of the greatest artists of our time.

“This exhibition is special because the Art Gallery of Windsor took time to select a range of works that are rarely paired together and from various bodies of work,” says Diaz. “If you are a fan of pop art and food, this is one exhibition you cannot miss. In addition, it complements the many other exhibits taking place at the same time.”

The Sandwich Project was conceptualized by the acclaimed artist Iain Baxter&.

“Years ago, Baxter& proposed to the Art Gallery of Windsor the idea of ​​an exhibition about Sandwich, Ontario in relation to sandwiches,” explains Meloche. “In 2016, I embraced Baxter&’s vision, and developed the theme into a series of 11 exhibitions between 2017 and 2018.”

To kick off the summer exhibition program, the Art Gallery of Windsor is partnering with WindsorEats for a special event. The opening reception on June 1 from 7 to 10 pm will coincide with Friday Night Lights, an evening pub crawl on bicycles organized by WindsorEats. The AGW’s opening reception will be its first stop and will feature sandwiches by local sandwich shops, such as Bread Meats Bread, Malic`s Restaurant & Delicatessen, and Toasty`s Grilled Cheese and Salad Bar, and local beer crafted by Sandwich Brewing Company

The Sandwich Project is sure to be an exciting, visually stimulating, and thought-provoking exhibition that will speak to a wide variety of audiences, says Meloche.
“Also, it’s not everyday that we have such a large selection of works by Andy Warhol in our region,” says Meloche. “Food is an incredibly complex subject matter. Paired with the growing trends of foodie culture, it is incredibly timely to be revisiting the many contributions that Warhol made to food aesthetics and food trends today.”

Individual Memberships are currently 10 per cent off, and can be purchased in advance online, by mail, by phone or in person. Visit www.agw.ca for more information.

Friday’s Live! is the official launch for all Spring-Summer exhibitions June 1 from 7–10 pm The event is free for AGW members and $15 for non-members.

The AGW recognizes its partnership with The Andy Warhol Museum, and its co-presenters and partners for the presentation of The Sandwich Project in Windsor: WindsorEats, Tourism Essex Pelee Island, and Media City Film Festival. Equally, the AGW recognizes the City of Windsor in-kind support and thanks the Ontario Arts Council, the Canada Council for the Arts and Ontario Trillium Foundation for their multi-year and project grant funding.

This story was created by Content Works, Postmedia’s commercial content division, on behalf of the Art Gallery of Windsor