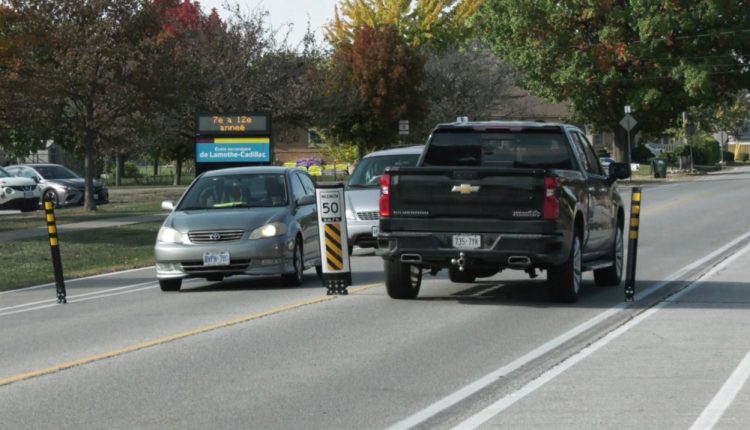 New flex signs and bollards have been installed on Totten Road and Holburn Road in Windsor, the first of their kind in the rose city.

“These signs narrow down the path of vehicles so people slow down. They are proven to work,” said ward 10 council candidate, Jim Morrison, who says traffic safety is the number one issue he’s hearing at the doorstep.

At $6,000 dollars per installation, Morrison says it’s one way the city is looking to slow down traffic and make roadways safer.

Since 2016, the city has spent $650,000 on dedicated traffic calming measures like bollards, crosswalks and speed humps.

“And despite these investments, Councilor Morrison and I feel strongly that we can and we should do more,” said Windsor mayoral candidate, incumbent Drew Dilkens. “And that’s why we’re committing to work with all members of city council after this election to ensure that the City of Windsor capital plan earmarks at least $2 million for traffic calming initiatives.”

The funds will go towards implementing aspects of the vision zero plan, a strategy to eliminate all traffic fatalities and severe injuries.

The plan is under development and will be voted on by the next elected council.

“We needed to do this 10 years ago, 20 years ago, 30 years ago, the next best time is to do it now. And we haven’t been doing it now,” said challenging mayoral candidate, Chris Holt. “We’ve been dragging our feet. We’ve been not paying the attention that it really deserves.”

Holt has been pushing for road safety throughout his two-term tenure on council and during the municipal election campaign.

Holt is also the driving force and task force chair behind vision zero, noting the plan has been in development for nearly two years since he raised the issue at council.

“I don’t need credit. I just need safer roadways,” Holt said. “We just need an elevated quality of life in all our neighborhoods across the city.”

Dilkens said council already pledged to spend $1 million on traffic calming measures, which are already in place or soon to begin.

“I hope to work with the next council to consider new techniques and infrastructure improvements that help reduce traffic incidents while improving vehicular flows. As always, safety will be my number one priority,” he said.

Dilkens says it’s too early to commit to the entire incomplete plan, but is eager to commit money to fund future projects.

“I know my opponent is out there committing to implement all of the recommendations in Vision Zero. I haven’t seen them yet. The process isn’t done,” Dilkens said. “I want to see what it is I want to see what the cost would be and then, like we do with every other master plan, trying to find a sensitive way to implement the plan.”