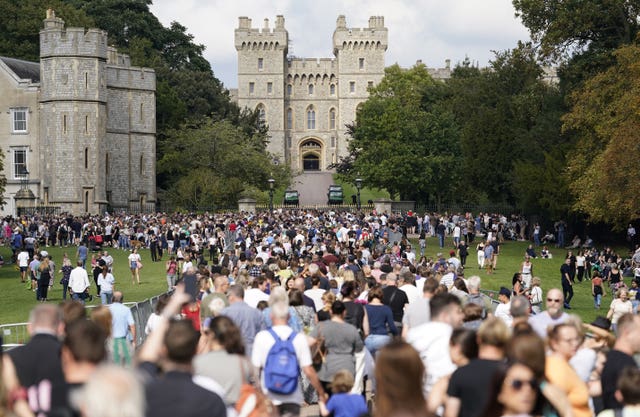 Churches in Windsor are paying tribute to the late Queen amid huge crowds visiting the town.

A constant stream of thousands of people placed flowers, cards and stuffed animals outside the gates of the castle on Sunday.

Meanwhile, a church in the Berkshire town was packed with well-wishers lighting candles ahead of a small service of prayers to commemorate the late monarch.

King Charles III ascended to the throne following the death of his mother, Queen Elizabeth II, on Thursday.

He was then formally proclaimed King in a historic ceremony at St James’s Palace in London following a meeting of the Accession Council, during which he swore an oath to privy counsellors.

People had been arriving early on Sunday to lay down their tributes, some with tears in their eyes.

Nearby roads were closed off and walkways were blocked as an accession proclamation ceremony took place near the Queen Victoria statue.

Crowds sang the national anthem and shouted “God Save The King” as the band of The Household Cavalry marched at around 12.30pm.

Staff at the church told of being “very busy” during the day, with well-wishers leaving messages expressing their sadness and gratitude. 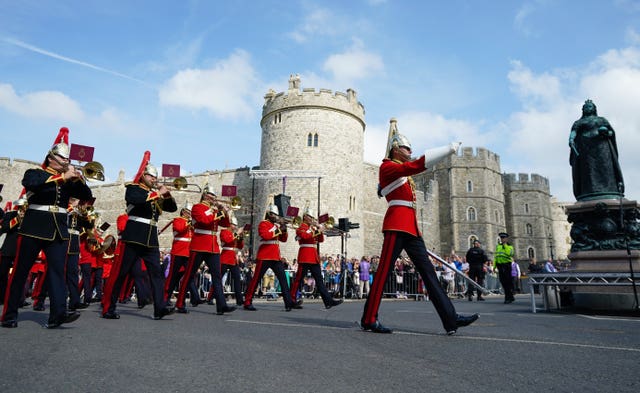 It comes ahead of a small service of prayers which will take place at 5pm to pay tribute to the Queen.

Reverend Canon Sally Lodge, speaking during an earlier service at the nearby Parish Church of St Stephen & St Agnes, said: “Gracious God, we give thanks for the life of your servant Queen Elizabeth, for her faith and her dedication to duty.

“Bless our nation as we mourn her death and may her example continue to inspire us.”

She went on to praise the “dedication to public service” of the King.

Church-goers had the opportunity to sign a book of condolence and sang the national anthem after the service ended.

It came as stewards implemented a one-way system for those wishing to lay tributes at Cambridge Gate near the castle, due to the large numbers of people forming on the Long Walk.

Military veterans could be seen among those paying tribute.

Alvie Porter-Smith, 87, who lives nearby, speculated that the number of people visiting on Sunday could be the largest yet.

He told the PA news agency: “Already there are queues along the Long Walk, but it’s a rather nice atmosphere, with people making conversation.”

Varun Singh, 34, who was with his wife Karanpreet, from Taplow, Buckinghamshire, said: “We wanted to pay our respects to a great Queen before the working week starts, she deserves that.

“It’s a really warm atmosphere and everybody is calm and respectful.

“I hope the new King knows what his mother meant to everyone, and I know he will do a wonderful job.”

William Robert, 67, from the local area, brought a large bouquet with a written message attached.

He said: “It’s a message declaring my thanks for the Queen’s life of service and immense love for her nation.

“I’m very emotional, actually, her death has deeply moved me and I’m sure the country and its people as well.” 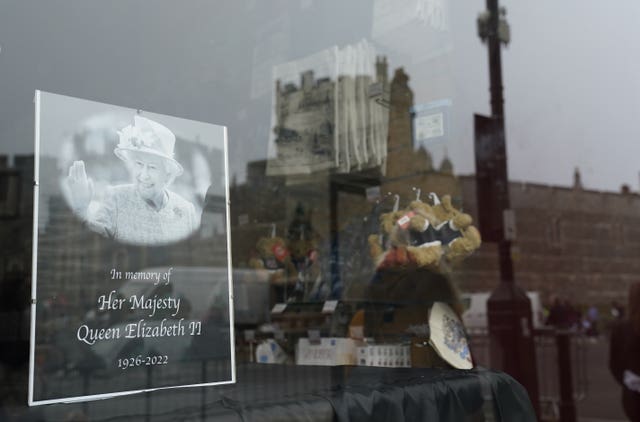 A photograph in memory of the Queen seen in the window of a shop in Windsor, Berkshire (Andrew Matthews/PA)

Children could be seen laying down Paddington Bear toys and drawings of the late Queen, along with cards and letters.

Also among the visitors was Lucy Pursley, from nearby Maidenhead, with her mother Kathy and three children, who took five bouquets of different-coloured flowers which they had each picked out at a nearby shop.

Ms Pursley said: “We really wanted to come here and show our respects. Each of us picked our flowers out and have written a message on them.

“It would be nice to know someone from the royal family read them just so they know what the Queen meant to everyone, even children.”

Ned Hart, 43, from Egham in Surrey, said: “I’ve been here every day and have laid flowers each time.

“It’s nice to see the pile of tributes building up; I hope the whole area is covered by the time of the funeral.

“The number of children and young people I’ve seen here is also heart-warming, the next generation will not forget our great Queen.”