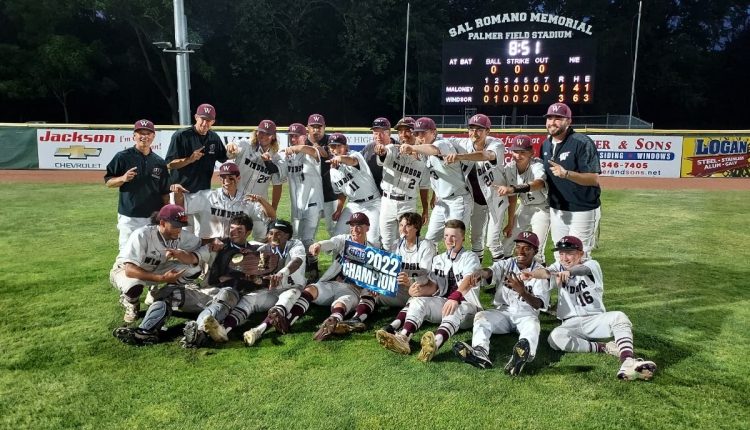 MIDDLETOWN, CT — One errant throw snapped a 1-1 tie and propelled Windsor High School to its first state baseball championship in more than three decades, as the Warriors defeated Maloney 3-1 in the Class L title tilt Friday night at Palmer Field.

A leadoff single by Frank Kula and a walk to Ryan Cramer gave top-seeded Windsor runners at first and second in the bottom of the fifth inning. In an obvious colorful situation, Breon Parker laid down a beauty on the third-base side which was fielded by Maloney pitcher Ryan Killeen. Not only did Parker beat out the bunt, but Killeen’s throw sailed over the head of first baseman Jack Fitzgerald, bringing both runners around to score.

Windsor had drawn first blood with some small ball in the second inning. Eli Fangiullo led off with a walk, moved to second on a bloop single by Brandon Cosgrove and eventually scored on an infield single by Kula.

Maloney tied it in the third when Tyler Duffy scored on a sacrifice fly by Killeen. Fangiullo prevented further scoring by scooping up a low throw to end the inning. Windsor pitcher Nathan Acabchuk then worked out of a bases-loaded jam in the fourth, enticing an inning-ending groundout.

The Spartans placed a runner at first with one out in the seventh, but a spectacular 5-4-3 double play provided Windsor with its first crown since 1991.

Maloney has yet to capture a state baseball title, finishing as runner-up for the third time.

Youth Wellness Hub for Windsor-Essex gets a boost