The Greater Essex County School Board (GECSB) is a step closer to potentially removing police programs from its schools. But despite some calls from advocates, that decision will include police.

Trustees voted 11-1 during a four-hour meeting Tuesday night to strike a committee to look at programs that include high school resource officers, anti-drug education programs, and an anti-bullying program for sixth graders.

The new committee will review a report by consulting firm LogicalOutcomes, which recommended removing police and police programs from Windsor-Essex public schools. After a lengthy debate, trustees voted to have police on that committee.

“Local police have to be at the table if we are going to be discussing if there is going to be improved service delivery,” said Ron Le Clair, trustee for Amherstberg and LaSalle.

‘Your school board is not exempt’

“I urge the trustees to not even consider this motion, and to understand this is continued disrespect,” she said.

The board commissioned the LogicalOutcomes report, which recommended a committee made up of school administrators, two trustees, local police and community members “consider next steps.”

Andrea Vásquez Jiménez, Toronto-based director for Policing Free Schools, said police should be left out of the conversation. She also said it’s a matter of human rights and equity.

GECDSB ‘behind and backward’ about anti-Black racism, says advocate

Elsworth asked why the dismantling anti-Black racism committee wasn’t consulted, or a part of the recommended committee.

“Too long a culture of incompetence regarding community consultations has been allowed to flourish at this school board,” she said.

She said current classroom based police programs in schools, like anti-drug programs, should be replaced with community members talking about their lived experiences.

The vote came after a lengthy debate in a meeting that ran until nearly 11 p.m. Trustees were also supposed to discuss renaming schools and mascots, but they ran out of time.

That was in part because of the open mic portion of the meeting. A member of the public went over her allotted five minutes of time as she described the board’s LGBTQ-related curriculum as “grooming” children.

Hatfield said the board might need to rethink its rules around the open mic. 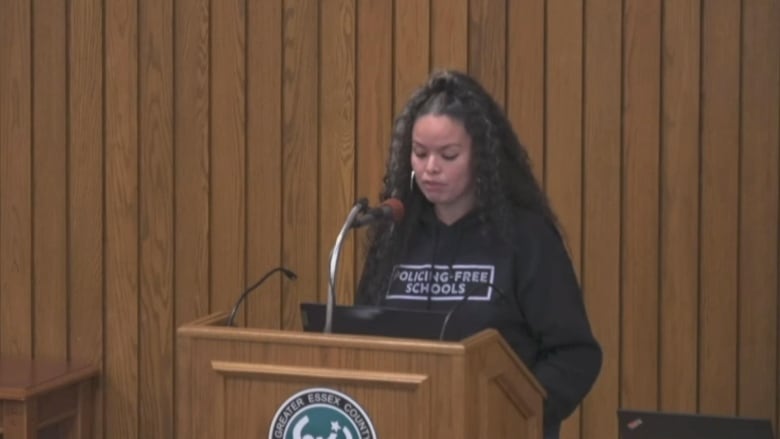 “This is one of the few boards that gives the public the right to sign up and come to speak to us in an open forum. This is not typical across the province of Ontario,” she said.

“But if we can’t do it in a way that is respectful to the fact that this is a business meeting of the trustees, then this practice might not be able to continue, and I think that would be a detriment.”

Meanwhile, the mascot and school name decision is postponed indefinitely. Among the names to be discussed: Queen Victoria Public School and Prince Edward Public School.

“You’ve received the report and it’s being tucked away,” Hadfield said. “It doesn’t mean it can’t be dusted off at a later date.”

Auto sector the focus of PM Trudeau visit to Windsor