The iconic story of Ebenezer Scrooge is coming in its musical form to Windsor this month. A Christmas Carol – The Musical is being staged by Windsor Light Music Theatre at Chrysler Theater from November 18 to 27 for six performances only.

The famous story tells of Ebenezer Scrooge, a prosperous curmudgeon who believes that personal wealth is far more valuable than the happiness and comfort of others. With an infuriated “Bah! Humbug!” Scrooge sums up his feelings of Christmas tidings and charitable giving, but he’s forced to face his selfish ways when three ghosts on Christmas Eve lead him through his Past, Present and Future.

It’s not the first time WLMT has staged A Christmas Carol, but with COVID and the pandemic still fresh in our memories, it will most likely feel like the most triumphant version yet. Christmas is coming back and there’s no better story to bring in the season with.

Tickets are $35 each, or $30 for seniors and youths and are available at the Chrysler Theater box office.

We got the chance to ask director Micheal Roy about the show.

You’re directing one of, if not the, greatest Christmas story ever written. No pressure at all (LOL). Tell me about what this Windsor Light Music Theater production has to offer.
This production has all of the elements of that we know and love in the Dickens classic but adds a fresh new twist with gorgeous music. We have a cast of 54 performers on stage, a full live orchestra, and about 50 more volunteers working in various areas of production. Leading this group has been an absolute pleasure as we come back with only our second production since our COVID intermission.

I didn’t know there was a musical version of this. Tell me about the music.
The music is written by Alan Menken, known for Disney hits like The Little Mermaid, Beauty and the Beast, and Aladdin. The show is almost completely underscored and includes lots of rich orchestrations.

How does the show benefit from the addition of the music?
The addition of music to this story heightens everyone’s emotions and lets us see another side of Scrooge that isn’t always explored so deeply. The audience can really feel the joy and celebration at Mr. Fezziwig’s Annual Christmas Ball while also exploring the pain of Scrooge’s past mistakes in Yesterday, Tomorrow, and Today. Music speaks to us on a different level than words, and it plays such a magical role in this version of this well-known classic.

Is there a song that is your favorite from the show?
One of my favorite songs from the show is Christmas Together. It feels like a great Christmas song that you’ve always known without having heard it before. It’s a glimpse into Christmas celebrations across London and it brings on the feelings of warmth, love, and Christmas spirit. 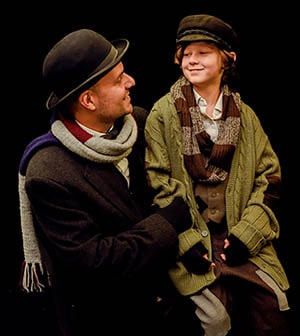 What will you be adding to the Windsor production that might make it more unique than other versions?
What makes our production unique is the large cast with various generations on stage. We have actors from eight years old to about 70 years old performing in this production. Windsor Light Music Theater is celebrating its 75th anniversary in 2023 and I wanted this production to be a coming together of our new and “seasoned” members.

Nicholas Morvay will be conducting the live music. Tell me about working with him.
Nicholas Morvay is amazing to work with. He is an excellent accompanist and a very talented music director. He has the task of teaching the music from the show to performers of all ages and various musical abilities. He also assembles the orchestra, which is comprised of local professional musicians, and is the conductor. He wears many hats, and it has been an absolute pleasure to work with him.

A lot of famous actors have taken on the role of Ebenezer Scrooge over the years. Do you have a favorite?
That’s a very tough question to answer because there are so many iconic renditions of Ebeneezer Scrooge. A few standouts for me are Jim Carey in the 2009 animated feature film and Kelsey Grammar in the 2004 made for TV movie version of A Christmas Carol the Musical. 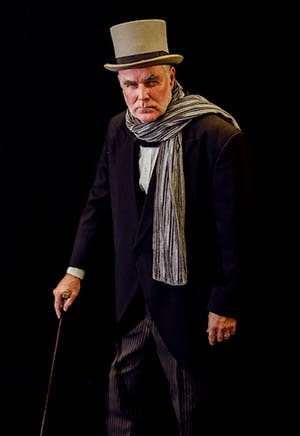 Who did you select to play Ebenezer, and why?
Our production features Jim Reid as Ebeneezer Scrooge. He has been a member of Windsor Light Music Theater for many years and is no stranger to our audiences. He has done so many great things with this role and I know that audiences will love his transformation each night from the old, mean Ebeneezer Scrooge to the happy, loving and light version of Scrooge he evolves into.

How big is this cast?
This production features 57 performers on stage and 17 singers under the stage.

How big is the crew?
We have a crew of approximately 60 volunteers who have been working on the show since May 2022.

How big is the orchestra?
Our orchestra is made up of 15 professional local musicians.

It takes a lot to stage something this big. How much pressure is actually on the director of a show like this?
There is quite a bit of pressure on the director for a production of this size, but luckily, I have many teams of dedicated volunteers. WLMT is a big family, and we all work together to put on the best shows that we can for Windsor-Essex audiences, every spring and every fall since 1948.

With all the movies, TV specials, musical productions and even The Muppets, is it harder to stage something so recognizable?
I see it as more of a fun challenge to keep this well know story fresh and new. It’s great to have an audience come in knowing the characters and the story, but I think this version of the show holds quite a few surprises.

What do you hope audiences will take away from this presentation?
I hope that audiences will leave the show feeling festive and filled with Christmas spirit. It’s a great way to kick off the holiday season.