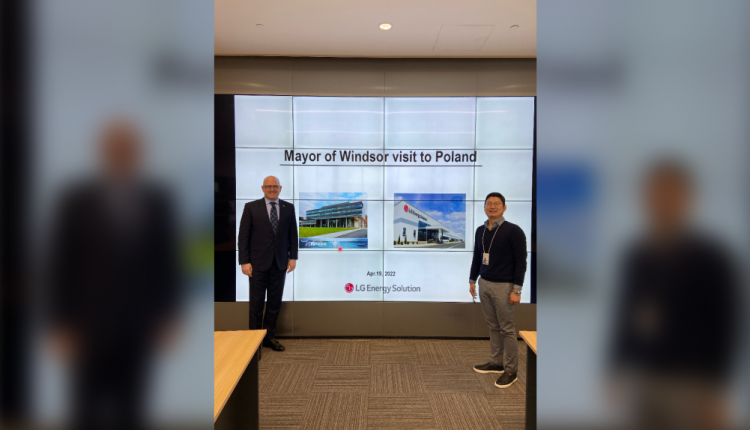 Windsor Mayor Drew Dilkens is in Poland Tuesday and Germany later this week pitching Windsor as the best place to situate the supply chain needed to feed the $5 billion Stellantis and LG electric vehicle battery plant.

“My goal is to put the ‘win’ in Windsor and make sure not only to we get the biggest piece of the pie, but we get all the other slivers as well,” Dilkens said over zoom Tuesday.

The mayor has been meeting with LG Energy Solution officials, touring the EV battery plant in Poland and learning about the processes that are built up around such a facility.

“I have never seen anything like I’ve seen today at the LG battery factory,” he said, noting Windsor’s new factory will be similarly-sized to the one in Poland, but will feature more automation and productivity.

While it’s good to help envision what’s coming to Windsor, Dilkens said he’s not willing to merely accept the factory without pressing hard for many of the spin-off jobs that are created in the EV battery new supply chain.

“My goal is to make sure that on behalf of Windsor taxpayers that we’re getting all of the supply chain that we can get because that will help offset some of the expenses that we’re incurring to get the battery factory itself,” he said.

LG has advised the city that more than 1,500 jobs and about 200 acres worth of supply chain activity will follow the company to the region, but they can be located anywhere within a 100 km radius of the Windsor plant.

Dilkens says he’s presenting the business case for these companies to locate at the Windsor plant’s doorsteps.

“I’m being introduced to a lot of companies that are located around this particular supply chain (in Poland) that will also be considering where to locate their factories as they work to supply the LG battery factory in Windsor,” he said. “That supply chain will also feed a lot of families in Windsor and Essex County if we can land them here.”

Dilkens’ travel budget has been minimal over the past two years due to the pandemic. While the cost of this trip hasn’t yet been tallied, he said it will end up costing a few thousand dollars, he promises it will be publicly reported and argues the juice will be worth the squeeze.

“The matter of a plane ticket and a hotel for six nights, if you do the math on that versus what we generate from a trip like this, the difference will be exponential,” he said.

“Judge me on my performance, that’s all I ask at the end of the day.”