Windsor chiropractor Sinan Yasarlar describes the events of 1980, when he was six years old and his father was laid off, as “rough times.”

“It’s little things like, ‘We can’t get that. We can’t go there’. We didn’t have a car, so we took the bus. We couldn’t afford a car,” said Yasarlar, who is also the public relations director at the Windsor Mosque.

According to Yasarlar, his family lived in subsidized housing on Curry Avenue.

“We had very simple furniture. We had maybe one rug. We didn’t live extravagantly,” Yasarlar said. “When my dad got me shoes, it meant a lot, so that means I must not have had new shoes for a long time.”

The experience matured him, but it also made him realize the importance of food banks in Windsor and Essex County.

In 2019, a recent influx of newcomers has now put greater strain on the food bank at the Windsor Mosque.

Dawud Aderinto, director of the Islamic Social Welfare and Assistance (ISWA) program which runs the food bank, said they feed 450 families every month, and donate to others throughout the year.

The Windsor Islamic Association and the mosque are currently involved in their annual Christmas food drive — one of four they take part in throughout the year.

Mustafa Akyar uses the food bank at the mosque, as well as other services at ISWA. (Dale Molnar/CBC)

Mustafa Akyar was once a truck driver, but botched surgery and Crohn’s disease left him on social assistance. He said he’s grateful for the help the food bank provides.

“It helps a lot,” he said. “Today there are a lot of people in need, so sure I appreciate it a lot.”

Gimil Khassim said he and his wife get by on a small pension.

“It helps a lot, because things are very expensive these days,” he said.

Khassim is also thankful for the fresh vegetables the food bank distributes every Friday after prayers. 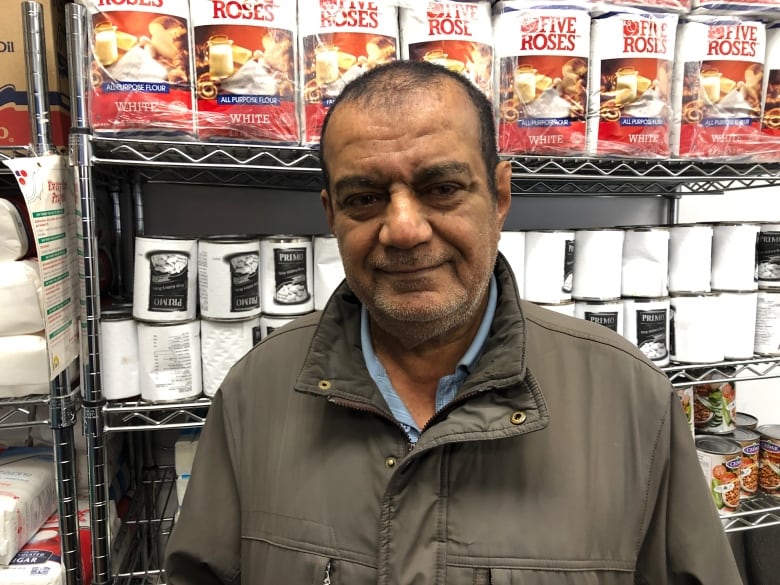 Gimil Khassim and his wife use the food bank at the Windsor Mosque. (Dale Molnar/CBC)

Yasarlar said food banks in Windsor-Essex are essential, and is calling on the community to give generously to the mosque’s food bank, as well as others in the community.

“If we don’t help them out, who’s going to help out?” said Yasalar.

Aderinto said the food bank’s clients are mainly Muslim, but added that anyone is welcome, because the food bank distributes the food based on individuals’ incomes — not their religion.