WINDSOR, NS — Increasing food prices amid a worldwide pandemic has made keeping the shelves stocked at the Matthew 25 Windsor and District Food Bank a considerable challenge.

That’s why Ashley Hingley, a representative with the local food bank, is so grateful for community-led fundraisers like the one held Dec. 11 outside Sobeys in Windsor.

“To have the RCMP and Victims Services show their support for what we do, it’s very humbling,” Hingley said of the recent Stuff a Cruiser event. “It means everything to us. It means that we can feed more people.” 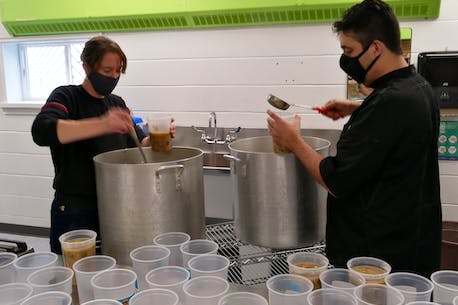 const. Ian Murphy of the West Hants Regional RCMP said it was wonderful to see the generosity. It was his first time participating in the Stuff a Cruiser event, which has been running for about a decade in the area.

“I live here; I work here. The people that are in the town and in the community of Hants County, their well-being is important to me,” said Murphy. “When I can come here and contribute in some small way for those that are unfortunate or down on their luck, absolutely I’ll do that. I enjoy that.”

In 2019, the food bank helped about 50 clients weekly. Hingley said the need continues to grow as more people are impacted by stagnant wages and COVID-19-related circumstances.

“We’re averaging four to five new families a week and we’re open two days a week. It’s been like that for about six months,” said Hingley.

“I think a lot of it has to do with the price of groceries — it has gone up.”

The 12th edition of Canada’s Food Price Report, an annually produced report published by Dalhousie University and the University of Guelph, predicts Canadians will be paying even more for the basic necessities in 2022. Overall, costs are forecast to increase by five to seven per cent , particularly for items involving dairy, vegetables and baked goods.

Food bank staff and volunteers are worried about the predicted rise in costs.

“Wages have not gone up, but the price of food has gone up,” Hingley said.

And with income-replacement programs, like the federal Canada Emergency Response Benefit (CERB), finished, she noted more people are finding it harder to make ends meet.

“Now, the mandate to be vaccinated for certain jobs has people losing their jobs. People who have never, ever had to use a food bank have to use it now because they just can’t afford it.”

Hingley said despite the financial challenges everyone is facing, the community has been very generous, donating pantry staples to help the food bank serve the growing demand. Still, that need is increasing weekly.

“The need has just gotten so much greater over the last couple of years to the point that we’re not getting as much donations as we used to and it limits us to what we’re able to give out,” she said.

Peter Armstrong picked up some extra peanut butter when he went grocery shopping at Sobeys and donated it during the Stuff a Cruiser fundraiser Dec. 11. Pictured with him are RCMP Const. Ian Murphy and Safety Bear. – Carole Morris-Underhill

“With the price of everything, people are having a hard time feeding their own family let alone having to come and donate something to us to help feed other families. It’s not just our food bank, it’s all food banks all over Canada right now. The need is so great.”

About 40,000 Nova Scotians access a food bank in the run of a year.

Details about the Matthew 25 Windsor and District Food Bank.

Where: 10 Sanford Dr., in the West Hants Industrial Park.

Why: To help feed people and families living in West Hants that are in need. Monetary donations as well as non-perishable food items are welcome.

Warm clothes needed ahead of winter in Windsor