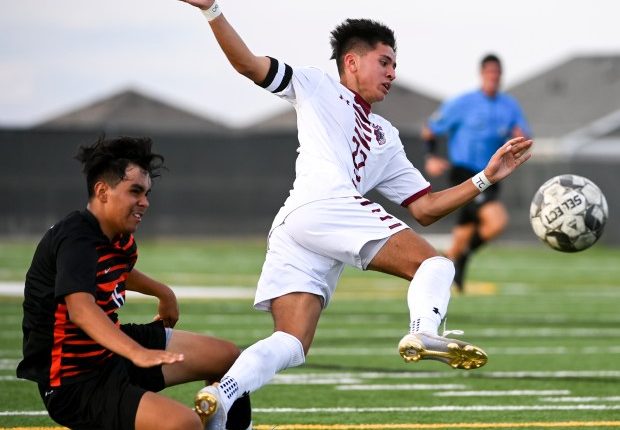 Windsor wins league match, in Longmont: Windsor shot a four-golfer score of 309 to place first out of eight teams in a league match hosted by Longmont at Twin Peaks Golf Course.

Northridge 10, Greeley Central 0, in Greeley: Northridge scored just one minute into the match and kept up a consistent attack before ending the game via mercy rule with 11 minutes, 51 seconds left. The Grizzlies scored four goals in the first half and six more in the second. Senior Juan “Chino” Beltran had five goals, while fellow senior Justus Alcala added three goals and four assists. Northridge improved to 1-0 with the nonconference win. Greeley Central fell to 1-1.

Fort Lupton 10, Valley 0, in Fort Lupton: Fort Lupton was explosive from the get-go in this nonleague win. The Bluedevils scored eight goals in the first half and two more in the second. Senior Santiago Gonzales and sophomore Caleb Adam had three goals apiece for Fort Lupton. Junior Diego Andrade had two goals. The Bluedevils improved to 2-0. Valley fell to 0-1.

Windsor Charter 3, SkyView Academy 2, OT, in Windsor: Windsor Charter prevailed in an overtime thriller to improve to 1-1 overall in its first season as a member of CHSAA. Trailing 1-0 at halftime, the Firebirds outscored SkyView 2-1 in the second half to force overtime. Senior Trevor Schmitz scored all three goals for Windsor Charter, including the overtime winner.

Prairie View 3, Roosevelt 2, in Johnstown: Roosevelt fell just short in its nonleague season opener. Prairie View scored all three of its goals in the first half. Junior Sean Siefken and freshman Tyler Baker each had a goal for the Rough Riders. Roosevelt’s senior goalkeeper Peyton Tiller had eight saves.

Windsor 13, Silver Creek 0, 6 inn., in Longmont: Windsor dominated its way to a 3-0 start to the season with a lopsided nonconference win. After neither team scored in the first inning, the Wizards pushed through eight runs in the top of the second. Windsor went on to out-hit Silver Creek 12-3. Five Wizards players each had two RBI, and five also each had two hits. Five Windsor players also each had a double. The Wizards’ pitching duo of junior Kinza Sagel and sophomore Jaklynn Harteker combined to allow no runs on three hits, striking out 10 and walking three.

Roosevelt 10, Thompson Valley 3, in Johnstown: Roosevelt’s flawless start to the season continued, as the Rough Riders improved to 4-0 overall, 3-0 in 4A Longs Peak play. After a scoreless first inning, Roosevelt took full control with seven runs in the bottom of the second. Junior Emmy Supernor, senior Bridget McNeil and senior Lauren Sperry each had two RBI for the Rough Riders. McNeil was solid in the pitcher’s circle, allowing two earned runs on five hits, striking out nine and walking two.

Greeley West 6, Fort Collins 5, in Greeley: Greeley West’s strong start to the season continued, as the Spartans improved to 5-1 with this nonconference win.

University 10, Faith Christian 0, 5 inn., in Greeley: University picked up a dominant nonleague win to improve to 4-1. Senior Kaden Wyatt hit 2 for 4 with a double, three RBI and two runs for the Bulldogs. Senior Kendree Kern and sophomore Iliana Martinez had two RBI apiece for University. Freshman Sydney Goetzel pitched all five shutout innings for the Bulldogs. She allowed just three hits, striking out four and walking none.

Northridge 19, Niwot 13, in Niwot: Northridge was swinging the bats with purpose, as it broke a two-game losing streak and improved to 2-2 overall, 2-2 4A Longs Peak play. After trailing early, 3-0, the Grizzlies took their first lead with four runs in the top of the third. Northridge took control with four more runs in the third and three in the fourth. The Grizzlies out-hit the Cougars 19-16. Northridge senior Hailey Michalik went 2 for 2 with two home runs and five RBI. Senior Jayah Tellez and junior Mikeayla Llamas each had four hits and four runs.

Frederick 10, Severance 0, 5 inn., in Frederick: Severance struggled against the eighth-ranked team in 4A, according to CHSAANow.com. The Golden Eagles were in full control from the get-go, jumping out to a 3-0 lead in the first inning and leading 8-0 by the third inning. The Silver Knights were unable to produce a hit, though they did draw four walks. Severance fell to 0-7 overall, 0-3 in 4A Longs Peak play.

Greeley West 4, Silver Creek 3, in Greeley: Greeley West picked up its first dual win of the young season, improving to 1-2 overall, 1-0 in 5A Northern Colorado Athletic Conference play. The Spartans won two of three singles matches, including senior No. 1 singles player Ashtyn DeNovellis’s 6-1, 6-2 win against senior Nick Selleck. In no doubt one of the most entertaining matches of the day, Greeley West’s No. 4 doubles duo of juniors Kash Ellis and Anthony Swift edged freshmen Cooper Herchert and Jackie Pierce 6-7, 6-4, 6-3.

Windsor 4, Longmont 3, in Windsor: Windsor was sharp in its season opener, which was also a 5A Northern Colorado Athletic Conference dual. The Wizards won two of three singles matches and two of four doubles matches. Windsor junior Zeke Rose defeated senior Henry Harshbarger 6-3, 6-4 at No. 1 singles. In the closest match of the dual, the Wizards’ No. 3 doubles team of senior Cole Myers and junior Booker Whittington edged sophomores Miles Walcott and Lukas Selleck, 6-4, 4-6, 7-5.

Severance 5, Riverdale Ridge 2, in Severance: Severance won all three singles matches and two of four doubles matches to improve to 1-1 overall in duals, 1-1 in 4A Region 4 play. At No. 1 singles, Silver Knights sophomore Joel Carter earned a dominant 6-0, 6-0 win. Severance’s No. 1 doubles team of senior Rylan Snyder and sophomore Warren Moore earned the tightest win of the dual, prevailing 6-4, 4-6, 6-1.

Centaurus 6, Greeley Central 1, in Greeley: Greeley Central received its sole win from junior No. 1 singles player Reid Richardson. Richardson secured a 2-6, 6-3, 6-2 win to improve to 2-0 in duals this season. The Wildcats fell to 0-2 overall, 0-1 in 4A Region 4 play.

Niwot 7, Northridge 0, in Niwot: Northridge was unable to win a match, falling to 0-2 in duals, 0-2 in 4A Region 4 play. In the most competitive match of the dual, Niwot sophomore Tyler Chivnova edged junior Ryan Hansen, 7-5, 6-2 at No. 3 singles.

Greeley Central 3, Prairie View 1, in Greeley: Greeley Central kicked off its season with a quality nonconference win. The Wildcats are looking to bounce back from a 4-19 campaign a year ago.

Thompson Valley 3, Windsor 0, in Windsor: Windsor struggled in its season opener against the top-ranked team in 4A and defending state champion. Thompson Valley won 25-20, 25-10, 25-21. Juniors Julia Bohlinger and Cailyn McCracken each had six kills for the Wizards. Bohlinger also led the team in digs (6) and tied for the lead in blocks (2). Sophomore Kadence Marsh added 14 assists, an ace, two blocks and five digs.