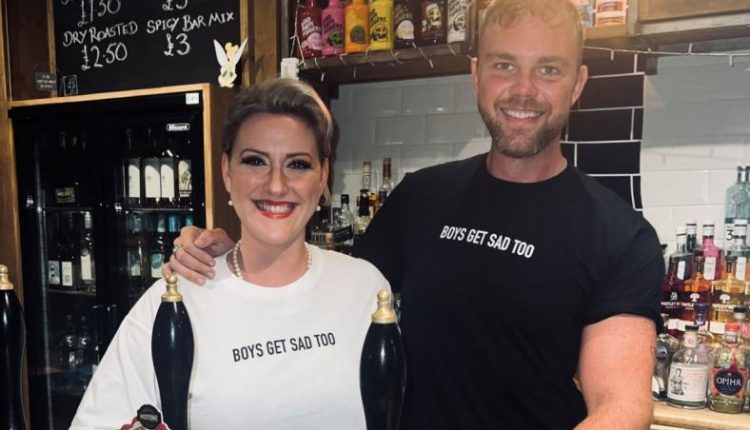 A PUB in Windsor has started a campaign to break the stigma around men’s mental health.

The Queen Charlotte, on Church Lane, Windsor, is ‘turning its bar blue’ to raise awareness and money for men’s mental health.

It will be in conjunction with the charity Mentell and all the staff will be wearing clothing from the brand ‘Boys Get Sad Too’, which donates 10 per cent of its profits to Campaign Against Living Miserably (CALM).

The pub launched the event on Monday, August 1, for one week, to encourage men to talk, and will run again on the first week of every month.

Barman Mike said: “Windsor has two army barracks, and a number of sports teams on its doorstep, that is a huge number of men in the local area, so hopefully The Queen Charlotte running this campaign can help any of these men, and any others, and encourage them to open up and discuss any problems they are having, and work to break the stigma associated with the term ‘man up’.

“We understand that having mental health problems can be lonely and we want the Queen Charlotte to become a safe space for guys to talk to their friends about such issues.”

Landlady Jess Hunter said: “With the struggles of recent years there has never been a more important time to talk about mental health.

“Unfortunately men struggled more than women with this and we really need to change the stigma around it.”

ALSO READ: Historic former Adelphi Theater could be sold off as it’s put on the market

Ms Hunter added the pub is trying to bring up the conversation at the Queen Charlotte and encourage the men of Windsor to talk.

She said: “If even one person finds comfort in it and opens up to someone then it will have been a huge success.”

The pub will have a charity box on the bar for anyone who wishes to donate what they can to the cause.

Mixed emotions as Windsor students go back to school