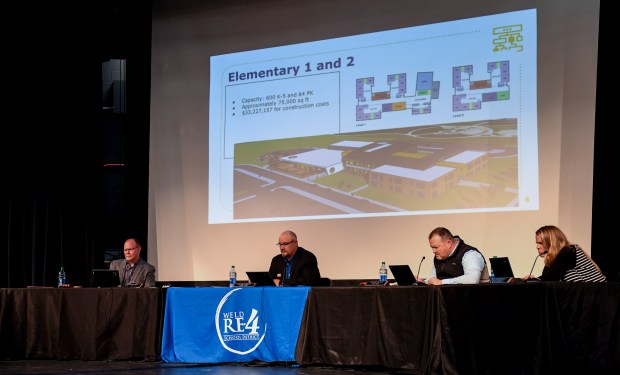 The Weld RE-4 School District will host community meetings this week on the bond and mill levy override ballot measures to go before school district voters later this year.

The meetings happen as the district within the last month received public support for the measures from two local entities.

Windsor Severance Fire Rescue and the Windsor Chamber of Commerce are backing the $271 million bond measure and a $5 million MLO that will go the ballot for voters’ consideration. Voters will decide if the district receives the additional funds to build, renovate and equip schools to manage growth in Weld RE-4.

The community meetings on the bond and MLO this week are noon Tuesday on Zoom (bit.ly/3qecsin) and 7 pm Tuesday at the Weld RE-4 District Office board room.

The bond proposal calls for construction of two new elementary schools, a new 900-capacity middle school in Windsor, additions to Severance Middle and High schools, a career and technical education center at Severance High and an expansion at Windsor Charter Academy.

The MLO will fund operations of the school system, such as teacher salaries, operational costs and technology. If the MLO is approved, the district would receive an additional $5 million annually with a proportional share going to Windsor Charter based on funded student count.

The MLO is not scheduled to sunset, or end, because it will be used for staff salaries beyond what the district’s general fund can provide.

WINDSOR, CO – MAY 04: The board listens to a presentation during a special meeting of the Weld RE-4 Board of Education at Windsor High School in Windsor May 4, 2022. The board voted to deny a proposal by charter school group American Legacy Academy to buy a plot of land in the RainDance community from the district in order to build a K-8 charter school. (Alex McIntyre/Staff Photographer)

The district says its asking voters for a dollar amount instead of a set mill levy rate. The district says this is an advantage to voters because as the number of property owners and assessed property values ​​grow, the cost of the MLO is spread through the community.

“As our community has grown over the years, we have typically seen a reduction in the mill levy override portion of your property taxes,” the district said on its website.

The Windsor Town Board offered its support of the measures last month.

“The school district needs this and it’s not frivolous spending,” Windsor Mayor Paul Rennemeyer said in mid-September. “This is pretty much a no brainer for Windsor. We know this needs to happen and we know it should happen. The community is behind the superintendent (Michelle Scallon, the former Windsor High School principal).”

The chamber of commerce said it has “carefully considered these two initiatives and we fully support these measures,” according to its letter. “We encourage the citizens of our community to do the same and vote YES on 4B and 4C.”

The ballot numbers for the measures are 4B for the bond and 4C for the mill levy override. Ballots for the general election will be mailed the week of Oct. 17, according to the Weld County Clerk and Recorder’s Office. Election day is Nov. 8.

“While we often hear that growth should pay for growth, we know all too well, it is just not that simple,” according to the Windsor Severance letter. “The increase in numbers of students your District has seen and what is expected is staggering and as a Board, we can understand and appreciate the need to request additional funds for future educational needs of those placed in your charge.”

Windsor Middle School is seen as sprinklers water the grass on May 25, 2021 on Main Street in Windsor. The Weld RE-4 School District is working on a potential $179 million bond package for school district voters. The middle school would be relocated to another site northwest of Windsor as part of that package, which could come up to district voters in November. (Alex McIntyre/Staff Photographer)

The fire district in its letter also said the bond and MLO will help the district in recruitment and retention of its employees.

“This bond and MLO will further support our ability to boast the educational opportunities in our hiring process and assist in maintaining employees within the community they work,” the letter said.

The Windsor Chamber of Commerce in its letter said it uses its mission statement to determine if the organization’s board of directors will take a position on a matter. The chamber’s mission is to grow business, build community, improve the business climate and quality of life “by adding value as we advocate, educate and support our business organizations.”

The chamber’s endorsement says it comes with the knowledge the bond and MLO will increase the tax burden on homeowners and businesses with a greater impact on businesses.

New Weld RE-4 School District Superintendent Michelle Scallon, who will begin her new role in early June, speaks to a group of district residents during a meeting on four potential bond package options Wednesday, May 25, 2022 at Windsor High School. (Anne Delaney/Staff Reporters).

The chamber says the benefits of the measures to the children in the community outweigh the tax burden imposed. The chamber says it has received assurances from Weld RE-4 Superintendent Michelle Scallon of the school district’s support of local businesses through “creative partnerships and shop local initiatives.”

“While our community continues to thrive and grow, our schools need support in providing adequate space so our children can continue to receive the high level of education that we’ve come to expect from the Weld RE-4 School District,” the letter also said.