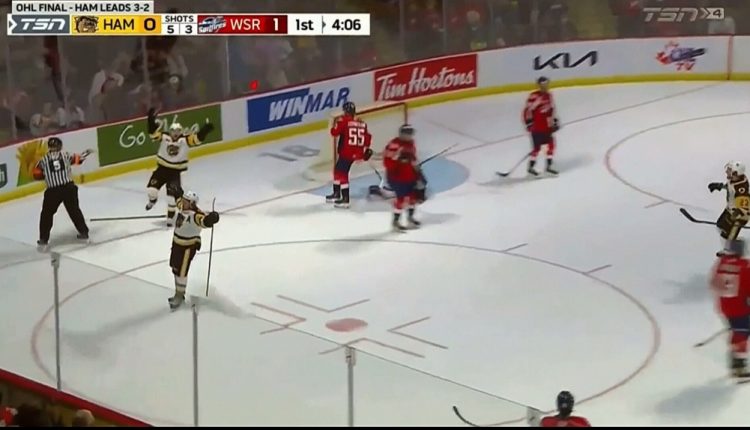 The Windsor Spitfires have a chance to win their first OHL championship since 2010 after staving off elimination with a 5-2 win in Game 6 of the finals against Hamilton.

“This is what we play for,” said leading scorer Wyatt Johnston. “We’ve grown so much as a team and I think we’re just a really confident group.”

The spits put themselves in a winner takes all position with a 5-2 win Monday night at the WFCU Centre. “We always talk it’s a journey and last night was definitely a tough test for us,” said head coach Marc Savard.

Hamilton’s Logan Morrison scored a pair of goals giving the visitors a 2-1 lead midway through the second. Daniel D’Amico then rose to the occasion like he did in games six and seven of the Western Conference final against Flint.

The 21-year-old scored his second of the night late in the period to tie the game.

“I’ve said it a bunch of times about not going home my last year in the Ontario Hockey League. I don’t wanna go away,” said D’Amico.

Less than a minute later former Bulldogs defenseman Michael Renwick went top shelf with what turned out to be the game winner.

“Playing against your former team, it’s really cool. You know the guys. You have bonds with some of the guys on the team but I’m trying to win a championship here so it’s really special and I love this group. I’m a Windsor Spitfire,” Renwick said.

A Spits team led by a captain who jumped up and down like a five-year old player when he scored on the powerplay during the first minute of the third making it 4-2.

“A game like that especially with the fans going crazy it’s definitely hard to contain your emotions when you score a goal like that,” Will Cuylle said.

Pasquale Zito added some insurance on a breakaway goal to help set up a one game winner takes all scenario.

Fans like John Botosan will be traveling to Hamilton the help give the team a boost of energy. He also made the trip to steel town for game five.

“I just like going to support the team and cheering,” said Botosan. “I have fun. It gives me something to do and I really enjoy the team. I’ve had season’s tickets since 1993.

Head coach Marc Savard had family in Hamilton Sunday for the game.

“They said you couldn’t tell at times where you were because our fans were just as rowdy as theirs,” he said.

After breezing through the playoffs with 12 straight wins the Bulldogs now face elimination for the first time. It’s a situation that could favor Windsor.

“We definitely have the experience in elimination game with our backs to the wall. We know what to expect and we know we’re going to come out strong,” Scavard said.

Windsor-Essex, Chatham-Kent housing prices may drop by 20 per cent by the end of 2023: report

Encore bet leads to big payday for a Windsor woman