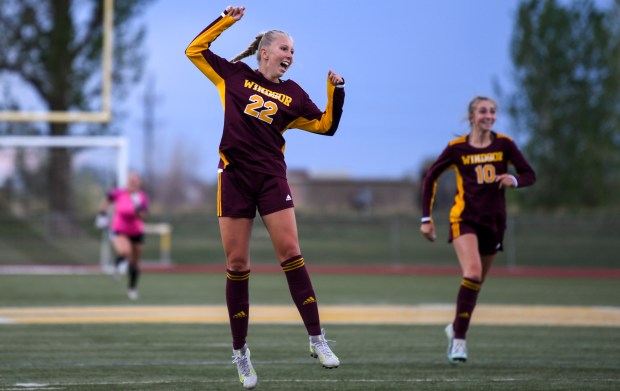 The lists are created by the Colorado High School Coaches Association with input from leagues and coaches.

This spring, Moody guided the Wizards to a 17-3 record and a runner-up finish in 4A behind Northfield.

Moody is joined on the 4A all-state first team by a pair of Wizards teammates: senior defender Jolie Jiricek and senior midfielder Carty Kingsbury.

WINDSOR, CO – MAY 17: Windsor’s Jolie Jiricek (22) reacts after scoring a goal to give the Wizards a 1-0 lead during the No. 1 Windsor Wizards 4A state quarterfinal girls soccer match against the No. 24 Air Academy Kadets at HJ Dudley Field at Windsor High School in Windsor May 17, 2022. The Wizards defeated the Kadets 2-1 to advance to the 4A state semifinal. (Alex McIntyre/Staff Photographer)