With food prices on the rise, here’s how to cook a healthy meal for cheap

With food prices across Canada expected to spike next year, a Windsor nutritionist wants families to know there’s a way to receive a high nutritional value — while saving money.

Karen Bellemore, a public health nutritionist with the Windsor-Essex County Health Unit and a registered dietitian, has developed a video series for the health unit to teach the public about how to cook healthy meals at a low price point.

It’s a goal that’s driven her for years, after having spent time working in the downtown core and meeting families who struggled to afford food.

“I kind of started taking a step back and looking at what systems are in place that are making it hard. And really, I just want to … help move that system so that everyone can afford to eat,” Bellemore said.

“Cooking is a passion of mine. And it really is sad when I know that it’s simply not affordable for so many in our community.”

This meal serving made up of rice, roasted vegetables and a fried egg costs $3.84. (Katerina Georgieva/CBC)

Food prices are already on the rise, and the trend is poised to continue. According to Canada’s Food Price Report, 2022 is expected to see the biggest annual increase on food bills on record.

It says that in the coming year, food price inflation is on track to increase between five and seven per cent — or an extra $966 a year for the typical family grocery bill.

“The amount is shocking because I do know that our wages aren’t increasing in the same way. And when it comes down to it, if you can’t afford food — it doesn’t matter all the skill you have in the world — you simply can’t afford food,” Bellemore said.

She said the cost of food is directly linked to the issue of the need for a living wage. She said some groups — such as women, indigenous people, visible minorities and people with low income — “get hit the hardest when these increases happen, and unless they make more money, they’re still going to be in the same spot.”

“Using our voices to advocate for things like that will make it a little bit easier to make food a little bit more accessible is really important … so that we can have a community that can afford to eat.”

While it’s difficult for many families to see prices go up, there are some things they can do, Bellemore explained.

While canned and frozen vegetables and fruits get a lot of flack, Bellemore said, they’re equally as healthy as fresh, plus they tend to be cost effective. 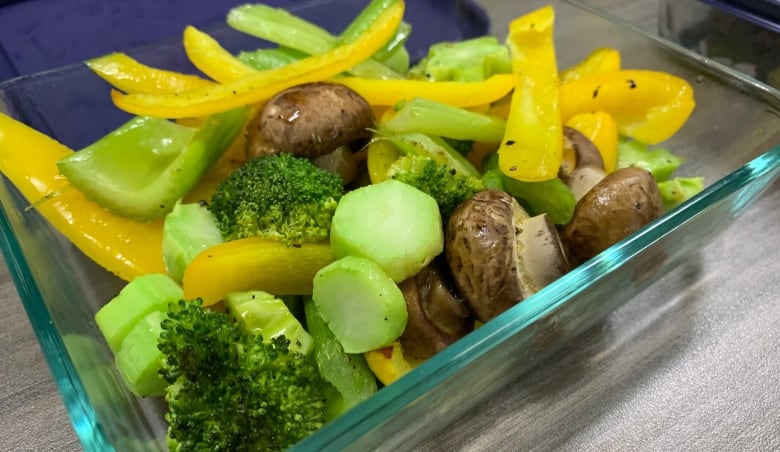 If vegetables are on their way out, don’t throw them out, says Bellemore, a public health nutritionist with the Windsor-Essex County Health Unit. You can roast them instead. (Katerina Georgieva/CBC)

But if you’re purchasing fresh items, it’s important to help them last longer, and make sure they get used instead of ending up in the trash.

“When we throw away food we’re basically throwing away money,” she said.

For example, Bellemore recommends roasting those vegetables if they’re on their way out.

One of Bellemore’s video tutorials also teaches viewers how to cut down a whole chicken. She explained that so often, we pay for convenience. Usually at the grocery store, customers buy a package of chicken that’s already broken down, and they pay more as a result.

“So if you learn how to do the work and you have the time to do so, it’s going to save you money,” she said.

Bellemore also encourages families to find cheaper alternatives to meat, like to try incorporating more plant-based proteins into their diets, like beans and lentils.

“They are very cheap, again, cost effective, easy to use, often in cans, so that you can store them for a little bit longer and you just incorporate them the same way that you would meat — you just replace them,” she said.

“So something like a chickpea actually has that heartiness of meat. So if you’re looking at a stew or a curry, you really can just swap the meat for the chickpea and you’re going to save a lot of money that way. “

For celery, if it’s starting to get limp, put it in cold water for five minutes to crisp it up.

Eggs are a great an affordable source of protein.

Oatmeal can be used to replace quinoa or rice as a grain in a savory meal. 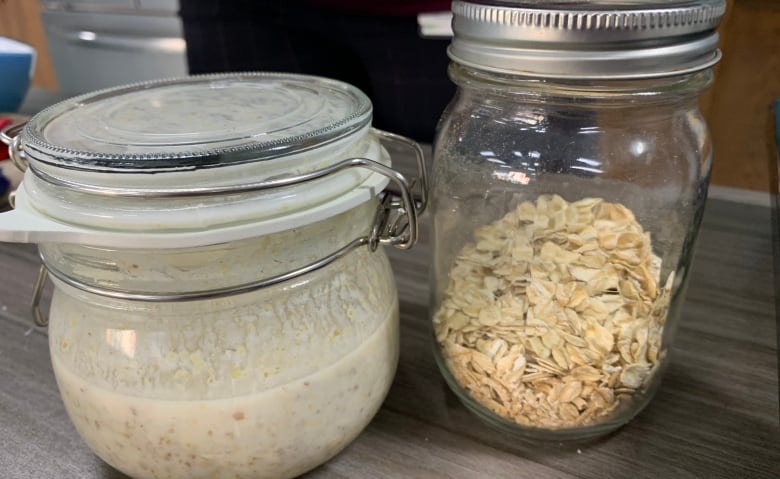 Bellemore says oatmeal can be a great grain alternative in savory meals. She also suggests making overnight oats as an affordable meal option. Mix oats with yogurt, milk, cinnamon flax seed and vanilla. Let it soak overnight, and it’ll ready to eat the next day, at a cost of $2.20 to make, according to Bellemore. (Katerina Georgieva/CBC)